Norfolk’s Police and Crime Commissioner (PCC), Lorne Green, has launched a consultation to seek public views on whether he should assume the governance of the county’s fire and rescue service.

Under the PCC's proposal, Lorne would become the Police, Fire and Crime Commissioner (PFCC) with a pledge to give the NFRS operational and financial independence while ensuring it retains its cultural identity.

Speaking today, as he launched the eight-week consultation, Lorne said: “People say that duplication of time, effort and resources makes no sense at all – and I agree.

"Some say if it ain't broke, don't fix it, to which my reply is that holding on to something that is good for now, may be the reason you don't have something better.

“There are some great examples of joint working between Norfolk Constabulary and Norfolk Fire & Rescue Service already underway but, if we are honest, successes have too often been slow, patchy and complicated."

In 2017, a new legal duty for the three main emergency services to collaborate was enacted by Parliament.

"This new legislation has presented an opportunity for PCCs to look at whether collaboration between the two services could be made simpler, faster and better", added Lorne.

"Can we cut duplication and bureaucracy, reinvigorate collaboration and move joint working further and faster for the greater effectiveness, efficiency and economy of our emergency services and, most importantly, the communities they serve? The answer from independent experts is yes.

"Having given careful consideration to all of the evidence provided to me in a thoroughly researched business case, I have today launched a public consultation to seek the views of the Norfolk public on whether I should assume the governance of the county's fire and rescue service.

"As your PCC, I hold the police to account for the joint working, whilst the fire and rescue service is overseen by a committee at Norfolk County Council - which means twice the governance.

"I believe the governance of the fire service sits better alongside a fellow emergency service, rather than a council committee which also oversees libraries, museums, archives and arts.

"One of the real benefits of the role of PCCs is that it is not hamstrung or delayed by a complex structure of committees, sub-committees and immovable meetings. PCCs can make informed, evidence-based decisions in a sharper, quicker and more effective manner.”

Under a Police, Fire and Crime Commissioner (PFCC):

The PCC believes this ‘is a much better way of working for a safer Norfolk’ and is keen to know what the Norfolk public, key stakeholders and partner agencies think.

“We are talking about two distinct services with distinct cultures, histories and traditions. That would not change. But a change of governance would allow us to do more to make our communities even safer.

“It is important that I now hear the views of the people of Norfolk and key partners before I make any final decisions. I await their views with interest.”

To have your say, take the 'A Case for Change' survey. 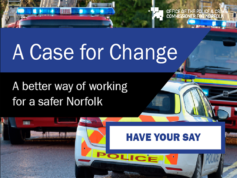 The ‘A Case for Change’ consultation will run until 5pm Wednesday 5 September 2018.

A copy of the full 'A Case for Change' business case is available here.