The team behind a young driver road safety campaign will deliver its 50th demonstration to Norfolk students this week.

The #Impact campaign – the initiative of Norfolk’s Police and Crime Commissioner (PCC) Lorne Green - has been touring schools and colleges across the county since it was launched two years ago.

This week it will travel to King Edward VII Academy in King’s Lynn for its 50th event.

Since its launch, more than 5,500 young people have been involved in the initiative which is actively supported by Norfolk Constabulary, Norfolk Fire and Rescue Service and the East of England Ambulance Service.

PCC Lorne Green said: “I take very seriously the pledge I have made to do all I can to prevent young people from being seriously injured or killed on our roads. To hit this milestone and have reached so many young people across Norfolk is a real achievement.

“My thanks go to the #Impact team for its continued commitment to educating Norfolk’s young people on driver safety and the fatal 4 - whether it be drink and drug driving, not wearing a seatbelt, using a mobile phone behind the wheel or excess speeding.

“I’d also like to thank all of the colleges and sixth forms who have welcomed the campaign and supported it in delivering to their students its hard-hitting but massively important messages over the last two years.”

The #Impact presentation starts with a video of Thomas Semmons, from Scarning near Dereham, who was seriously injured after losing control of his car in bad weather on the B1145 in Norfolk. 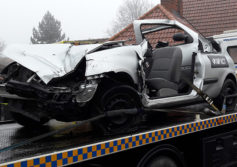 Thomas talks about his experience and the effect the crash had, not only on him but also on his loved ones. His car also tours with the campaign – showing the very real impact of what can happen when things go wrong behind the wheel.

Students then get the opportunity to observe a ‘crashed car’ demonstration with volunteers experiencing what is involved in having emergency services work to free them from a vehicle, as well as facing police questioning and arrest.

At the close of the event students are asked to reflect on what they have been part of, making their own pledge to being safe on Norfolk’s roads.

Inspector Jon Chapman from Norfolk Constabulary said: “Young drivers are disproportionately represented in casualty statistics which is why it’s so important we educate young people about the risks on the road.

“Education is key to this and what #Impact delivers is a powerful and thought-provoking presentation showing the stark reality of what can happen if you get it wrong.

“We’re committed to working with our partners to improve road safety and the mock collision display helps to focus the attention of students.”

KES Academy Principal Sarah Hartshorn said: “This is the second time that our students have benefitted from the #Impact demonstration and we are delighted to have the emergency services here once again showing our students first-hand the implications and educating them to be safer drivers.”