Gateway to Employment, an initiative which helps ex-offenders find work, has achieved a significant landmark with 75 employers having signed up.

The campaign is led by Police and Crime Commissioner, Lorne Green, together with the Department of Work and Pensions (DWP). It aims to work with local employers to secure training, apprenticeships and employment opportunities for ex-offenders; a strategy which has been shown to significantly reduce reoffending. 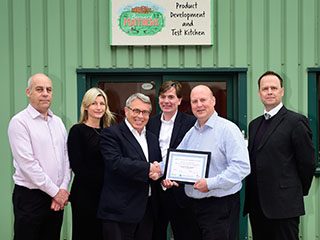 “We know that having a job can reduce the likelihood someone will go on to reoffend but, for many, the barriers they face in finding employment can make it difficult to leave their offending pasts behind them” Lorne said.

To mark this achievement, Lorne visited a number of local employers to thank them for their support and speak to those involved. The PCC visited Home Group, Kier Ltd and Bernard Matthews to present certificates marking the contribution of these Gateway to Employment supporters.

Speaking with both employers and employees revealed the range of mutual benefits. The PCC was told how employing ex-offenders through a programme such as Gateway to Employment has opened up a whole new pool of resources for Kier Ltd.

Alex Hitch, Health and Safety Manager at Kier summarised the benefits for ex-offenders as giving them a “good sense of direction”.

Commenting on his recent visits, Lorne said: “It was my pleasure to meet with some of the employers and employees of our supporting organisations and pass on our thanks for playing their part in helping ex-offenders to turn their backs on crime, reduce reoffending and thereby, helping to keep our county safe.

“To say that I found it useful would be an understatement and simply would not do justice to those I spoke to; both employers and ex-offenders. The value of speaking first-hand to those who have benefited from what Gateway to Employment offers gave me a real insight into the challenges that face both parties and the genuine and tangible benefits both gain from the experience.

“I look forward to working with them as we move the programme forward.”

An ex-offender who found employment through the Gateway to Employment campaign described what she wishes to achieve through her new employment: “If I can change the attitude of one person then that will be a success. In five years I want to have made real progress and I want to have also helped people like me.” She thanked Gateway to Employment, saying “every day I learn something new and I am so grateful for this opportunity”.

Her line manager has praised the way in which she “has seriously enriched the team” with “her hunger for knowledge and how keen she is to learn”. The line manager recognised the positive impact that the campaign was having both for the company and the employees, saying “as a result of our involvement our service has become enriched. We recognise that people need a sense of place, not just a building.

If you are an employer who is interested in finding out more about what Gateway to Employment can offer, contact Mary Scales at the DWP via email: mary.scales@dwp.gsi.gov.uk