Dozens of young people were given the chance to air their views on crime and policing at the latest question and answer session in Great Yarmouth hosted by Norfolk’s Police and Crime Commissioner Lorne Green.

The event, held at East Coast College in the town, offered students and local residents the opportunity to ask the PCC and Chief Constable Simon Bailey any questions or raise any concerns about policing in their area.

Regular Q&A events are part of PCC Lorne Green’s pledge to give the public access to the county’s senior officers while ensuring he and the wider police service are visible, accessible and accountable to all. 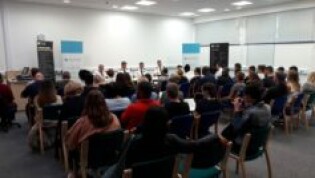 The event was the fifth Q&A of 2019, with the PCC and Chief Constable already having visited King’s Lynn, Diss, Norwich and Fakenham.

Getting an overview of police activity and priorities from Supt Nathan Clark, the meeting heard how there had been a 12% reduction in anti-social behaviour in the town in the past year (2955 to 2604).

Attendees heard how the number of overall crimes in the area had risen from 7,534 to 8,229 in the past year with the most significant increases being in drug offences (310 to 444) and thefts from motor vehicles (164 to 219), however they also heard there had been a fall in the number of burglaries in the district (527 to 425).

Opening the floor to attendees, the majority of whom were students from the college, Lorne Green, said: “Most of us are untouched by crime so please don't be alarmed by such figures.

"This is your meeting, not our meeting and we want yo hear your voice, what you see as a priority for policing in Great Yarmouth."

Supt Clark advised the meeting that the deployment of extra officers had led to increased arrests for possession and supply of drugs and possession of knives/weapons. He cited the success of the Force's Operation Moonshot Team who use the latest Automatic Number Plate Technology (ANPR) to disrupt organised crime.

"We deny criminals the use of our roads," said Supt Clark, "We go out of the way to seize their knives and drugs and make it uncomfortable for them to come into the borough."

Supt Clark also advise attendees police in the area had recorded 707 incidents of missing people between August 2018 and July 2019 – equating to 345 individuals with 22 reported as being missing on repeat occasions.

Speaking directly to the students in the room, Chief Constable Simon Bailey, said: "You are the ones that come to the college here, that live here, you will know what it is like to live here. It is invaluable for us to understand what it is like, the good, the bad and the indifferent.

"There is so much proactive police work going on and we are stopping people targeting our communities."

Prior to the meeting Lorne spent the afternoon meeting with students from the college to discuss policing.

“My undertaking has been, and remains, to give every man, woman and child in our county the opportunity to influence local policing where they live”, added Lorne.

“These events provide a unique opportunity for people to address their questions, concerns and ideas directly to the people in charge of the county’s policing service – something the Norfolk public has really welcomed."

The next Q&A event is due to take place in the Breckland area on Tuesday 19 November 2019. Location to be confirmed in due course.