"I'm a man of my word" - PCC delivers on election pledge

Newly-elected PCC Lorne Green met with Norfolk’s Chief Constable on Friday to deliver one of his election pledges.

“I made a promise to the people of Norfolk during my election campaign that, on my first day in the office as Norfolk’s PCC, I would no longer have a deputy.

“For the past 3½ years Norfolk’s taxpayers have had imposed upon them a burden of £75,000 year after year to pay for a deputy. 18 of 41 PCCs chose not to have one - it wasn’t necessary, it isn’t necessary. 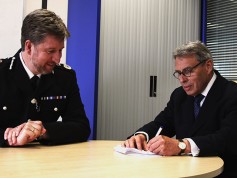 “I’m a man of my word. I met with the Chief Constable this morning and passed him a cheque for £75,000. I’ve asked him to spend that money on two new additional police officers on the beat. He’s agreed to do that.

“I want policing in Norfolk to be more visible. This is just day one, and it’s a start. I will do this every year for the next four years – a total of £300,000 of taxpayers’ money being spent on more police on the beat."

Asked what was next on the PCC agenda, Lorne replied: “Next I’ll be speaking to the Chief Constable about how we can do more to increase police presence and looking at what can be done to increase visibility across our county.”