A scheme to help protect Norfolk's churches from the threat of lead theft has been praised by the Police and Crime Commissioner after police figures showed a near 50 per cent fall in such crimes since its launch two years ago.

PCC Lorne Green joined forces with the Diocese of Norwich (the Church of England in Norfolk); the Allchurches Trust; the Norfolk Churches Trust and the Round Tower Churches Society to launch the innovative ‘Roof Alarm Scheme’ in August 2017.

For churches, the majority of which rely on volunteers, buying a roof alarm can be expensive and without an alarm approved by insurers, many church buildings are not fully insured. This means that if there is a lead theft or damage parishes do not receive sufficient insurance to cover repairs.

Through the partnership the initial hope was to install 50 alarms on church buildings - some 71 have now been installed to date. Prior to the scheme introduction police recorded 48 incidents of lead thefts (between October 2015 and August 2017), following the launch (between October 2017 and July 2019) some 26 thefts have been reported - a near 50% fall. 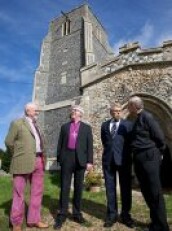 PCC Lorne Green, said: “When I launched the scheme with our partners two years ago I said my blood boiled whenever I heard a church had been targeted by mindless thieves and I still feel as passionate to this day.

“Churches are a place of worship and peaceful sanctuary as well as places where friends and family can come together to celebrate special occasions. They continue to be the beating heart of our communities also serving as meeting places for people of all ages which is why one act of senseless vandalism or theft can have a huge impact on the local community.

“It is reassuring to hear that since the scheme was launched the police have recorded a near 50% drop in reports of lead theft, however this does not mean we should rest on our laurels. We must do all we can to prevent these sacred places being targeted, including by equipping as many as possible with vital alarm systems to prevent such crime and protect our local communities.”

Acts of vandalism and theft can result churches having to redirect their attention from practically serving their local community through running soup kitchens and toddler groups, to raising funds to replace the roof and securing the building.

It can also prevent vital community activities from being able to meet, in often the only open building in the community, such as parent and toddler groups, dementia cafes, foodbank distribution and more.

The Archdeacon of Norfolk, the Venerable Steven Betts, said: “The partnership with the Police and Crime Commissioner and other donors means that the vast majority of our vulnerable churches are now protected by alarms. This not only provides reassurance for the communities in which the churches are located but also helps to reduce crime and the threat of crime. My hope and prayer would be that the alarms simply would not be necessary, but unfortunately they are, and have been very effective in helping to protect churches to ensure they remain welcoming centres in their towns and villages.”

Chief Inspector Craig Miller of Norfolk Police, said: “Crime prevention measures, such as the Roof Alarm Scheme, are important for tackling this crime and keeping these historic buildings safe. It also sends a clear message that we will use technology to protect rural locations and helps to reassure residents because we know the consequences of crime on churches affect the whole community.  I’d also appeal to communities to act as our eyes and ears and make a note of any suspicious activity. Don’t ignore anything that you think looks out of place - report anything you think may be suspicious to the police.”

If you would like to help to protect these vital community and historically important buildings you can donate to the Raise the Alarm campaign to provide more church buildings with Roof Alarms. To donate simply visit: http://uk.virginmoneygiving.com/fund/raisethealarm 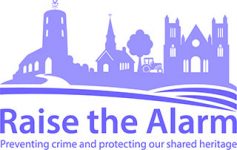 The Revd Mark Capron, whose church building has benefitted from an alarm, said: "We would like to say thank you to everyone who contributed to the Roof Alarm Scheme. Our building, like so many others in the county, is always busy either being used for worship and services such as weddings, funerals and baptisms or for lots of community events and activities. Having a roof alarm gives our church and the wider community a great deal of reassurance that these vital services can continue and that the church will always be an open welcoming space in the community for the community."

The Revd Andrew Whitehead Team Vicar in the Aylsham and District Team Ministry, said: "The roof alarm at Cawston Parish Church gives the community peace of mind. The consequences of a potential lead theft on such an important medieval building would be devastating; partly because of the amazing art and artefacts within the building but also because the church is in regular use by the community for worship and community events like our toddler group and our book & jigsaw exchange."

St Nicholas Church, North Lopham St Nicholas Church in North Lopham were preparing to host a family fun day with lots of free activities to keep children amused during half term. However, the day before Richard Vere, the Churchwarden, discovered that thieves had stripped half the lead from the church roof during the night.

PCC Secretary, Jennie Vere, said: “We are so lucky that the weather was dry that week if it had rained we may have had to cancel the festival and hundreds of hours of volunteers time would have been wasted and a family fun day ruined for the community. St Nicholas Church is visible to neighbours and passing traffic, and is very close to a busy road through the village. If thieves are brazen enough to take the lead from somewhere so visible, then nowhere is safe!”