Norfolk's Police and Crime Commissioner has visited the site where a brand-new specialist police station is being built to serve people living and working in the Broadland area, and beyond.

Broadland Police Station, which is being built on Broadland Business Park will see a significant boost to policing in the area and be best-placed to serve its growing communities.

Detective resources will be brought together under one roof, allowing the sharing of expertise and access to modern technology needed to tackle complex crime. The project is part of Norfolk Constabulary's wider estate plan, which will see officers and staff move from out-dated buildings which are expensive to run and allows the organisation to accommodate the extra officers recruited through the Operation Uplift programme.

To celebrate the erection of the building’s new steel frame, main contractor R G Carter held a steel signing ceremony on the first floor of the main office building. Police and Crime Commissioner (PCC) Giles Orpen-Smellie, led the signing of the steel structure to mark the milestone, with representatives from Norfolk Constabulary, architects Chaplin Farrant and members of the R G Carter site team also leaving their mark. Following the steel signing, guests were also shown round the site. 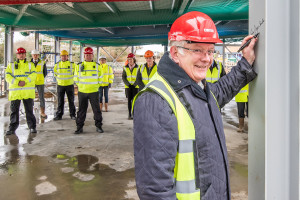 PCC Giles Orpen-Smellie, said: “As landlord of the police estates I was delighted to be invited to the signing ceremony – a true milestone for Norfolk Constabulary.

“It was good to meet those involved in the construction of the new facility which will not only benefit those living and working in the Broadland area, but many others who may be in need of support from one of the specialist policing teams who will be based in the station.”

Chief Constable of Norfolk Constabulary, Paul Sanford said:  “We recognise this is a significant investment, however in the long-run it will save the constabulary considerable costs across our entire estate. This is money can be invested into frontline policing, tackling the crimes and issues which matter most to our communities.”

The County Policing Team’s Patrol and Safer Neighbourhood Teams, will also be relocating from Acle and Sprowston to the new facility along with the Roads Policing team from Wymondham and Acle.

Director and General Manager of R G Carter Ltd, Mario Rackham said: "R G Carter is delighted to be delivering this much-needed facility for the local community and supporting the constabulary’s 2020 vision for better infrastructure and facilities in the county. It was hugely rewarding to be able to welcome all those involved in the project to see the progress we’ve made on site and to celebrate this milestone with those who will benefit from it the most.”

Broadland Gate Police Station is due to be completed in Autumn 2022 and will be the second of two new investigation centres across Norfolk unveiled by the force.