A ‘first-class’ police training facility, fit to train and equip the force of tomorrow, will open in the heart of Norfolk later this year.

With more than 600 officers forecast to join over the next three years, the facility, based at the former Hethersett Old Hall School site, will also allow the force to meet recruitment targets while remaining in the centre of its local community. There is also potential for further collaboration with partners including Norfolk Fire and Rescue Service, who the force already works closely with. 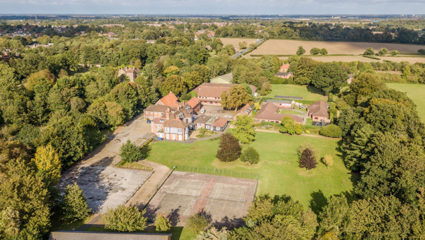 The site was purchased at a negotiated price of £3.35m at the end of February. It is expected to open in August following necessary development and refurbishment. The project has been funded through capital investment, including savings made through the renegotiation of PFI contracts around the constabulary headquarters, with no additional burden on the taxpayer.

The Learning Centre will provide 5,579sqm of accommodation, with 29 classrooms, offices for police trainers as well as a gym. The site also has an existing nursery which the constabulary will aim to keep in use, supporting staff and the local community.

The investment comes as the force works to meet growing recruitment challenges; the turnover of officers together with the introduction of the Police Education Qualification Framework (PEQF) and the Police Constable Degree Apprenticeship (PCDA) alongside a commitment by central government to increase police officer numbers across the country by 20,000.

Training for police officer recruits is currently delivered across the Wymondham headquarters site, however existing facilities do not have the capacity to deal with the number of new recruits expected over the next three years.

Norfolk’s Police and Crime Commissioner Lorne Green, said: “I am pleased that this exciting opportunity has been made possible due to the estates review I commissioned which identified sufficient efficiency savings to make the purchase achievable.

“Taken together with efficiency savings through a more effective training facility, combined with some realistic revenue raising possibilities, I am happy to say the acquisition of this site will be of no incremental cost to taxpayers.

“The need for a greater police resource has been building over the past number of years. I have managed to significantly increase officer numbers over the four years of my tenure. The fact is we have more men and women at Norfolk Constabulary today keeping us safe than we had when I first started.

“But that increase will only continue to grow given the undertaking by Central Government and with additional numbers comes additional training requirements.

“The Chief Constable has advised me we simply do not have the capacity to cope with this growing number of new recruits and as a result the current provision at police headquarters is inadequate.

“This new centre of excellence is close to the current police headquarters, in the heart of Norfolk and will help to continue to deliver a modern and innovative service for the county.

“These plans will not only preserve the heritage of this beautiful Norfolk building but also help boost the local economy. I also welcome the potential for further cross-force collaboration.

“I am pleased by the positive feedback we have had from the local community and our partners. This is an opportunity to bring back to life a unique and historical building where future generations of our policing family will be educated where those have gone before.”

Mr Bailey welcomed the news saying: “Our ambition is to create a centre of excellence for learning; one which can attract and retain the very best candidates as we move into a new era of police recruitment.

“Over the past decade we’ve sought to make this organisation as efficient as possible in the face of austerity while meeting the challenge of changing crime profiles and increased demand.

“This has included changes and reductions in our estates which inevitably has put more pressure on our headquarters in Wymondham.

“Our existing training facilities will simply be unable to deliver the best training for the 600 plus new recruits forecast to join the constabulary over the next three years.

“As always, our aim is to achieve value for money while creating a first-class training facility that meets our needs in providing an equally first-class service to the public of Norfolk.”

Norfolk has already seen increased recruitment through the introduction of a new policing model in 2018, with an additional 138 officers joining the force.

Mr Bailey added: “This new facility gives the right impression of what Norfolk is about; when recruiting officers, we want to set them up for the best success that we can. Training in such an iconic building with a focused learning environment will allow us to do just that.”

Margaret Dewsbury, Cabinet Member for Communities and Partnerships at Norfolk County Council, said: “It’s great to hear that this site will have a new lease of life. Our Fire & Rescue Service is looking forward to discussing options to be part of the future plans for the site with Norfolk Constabulary, as we explore the potential for more opportunities for joint working across our emergency services teams.”

Councillor David Bills, Hethersett ward councillor, said: “This is really good news for Hethersett and I am very pleased that this lovely old building is being put to such good and will have a productive future. It is also very good news for local businesses who I am sure will see an increase in customers.”

Adrienne Quinlan, Chairman of Hethersett Parish Council welcomed the news by saying “its good to hear that the future of this iconic site has been secured and we hope that the constabulary’s presence will further strengthen their relationship with the local community.”