The Office of the Police and Crime Commissioner for Norfolk has won a prestigious national award for the quality of its independent custody visiting scheme.

The inaugural Independent Custody Visiting Association (ICVA) Quality Assurance Awards were presented at a ceremony at the House of Lords yesterday, Wednesday 15 May.

Police and Crime Commissioners (PCCs) have a statutory responsibility to establish and manage an Independent Custody Visiting Scheme.

Independent Custody Visitors (ICVs) are members of the local community who volunteer to visit police custody facilities, unannounced and in pairs, to ensure the proper treatment and welfare of those held there. They report back to their PCC on their findings so that any issues or concerns can be addressed. This, in turn, also assists the PCC in holding the Chief Constable to account.

Last year, Norfolk’s 24 ICVs, organised across four visiting panels, carried out almost 200 visits across the county, checking on over 700 detainees.

This is the first year that ICVA - a national organisation which supports, leads and represents locally-run custody visiting schemes – have run the awards, which seek to help schemes: 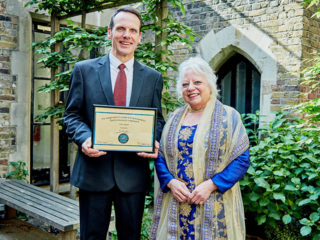 The award was accepted at the House of Lords ceremony on behalf of the Norfolk scheme by ICV Susan Harrowing and Scheme Administrator Simon Atherton.

On receiving the award, Susan said: “It is an honour to be invited to the House of Lords on behalf of the Norfolk scheme. The award is for the hard work by all the ICV volunteers who make the scheme such a success in Norfolk.”

Welcoming news of the award, Lorne Green, Police and Crime Commissioner for Norfolk, said: “ICVs are the eyes and ears of the public – volunteering their time to visit detainees, reporting on what they see and offering public reassurance that the police are treating people with fairness and respect.

“The commitment and dedication of these volunteers, and not to mention Simon who manages the scheme on my behalf, cannot be underestimated. What they do is largely unseen by the Norfolk public, but this award goes some way to recognising their work and achievements.

“It’s a truly unique and interesting volunteering role – if anyone is interested in joining our award-winning custody visiting scheme, I’d encourage them to get in contact with my office.”

Martyn Underhill, Chairman of ICVA, said: “These awards recognise the standard of scheme being run in the area, and help drive up the standards of our schemes across the UK.  Warm congratulations to all of the winners.”

“These awards demonstrate how local schemes use volunteer feedback to make change and ensure that police custody is safe and dignified for all.  I congratulate schemes on their accomplishments."

Anyone interested in joining the Norfolk custody visiting scheme as a volunteer should contact Simon Atherton, Scheme Administrator at the Office of the Police and Crime Commissioner – 01953 424455 or opccn@norfolk.pnn.police.uk. Applicants from the west of the county are particularly encouraged to make contact.