Collar numbers will be issued to all current serving and future police dogs in Norfolk and Suffolk in recognition of the vital role they play within policing. 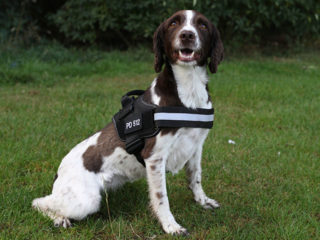 PD Maggie with her collar number

Following a suggestion from Norfolk's Police and Crime Commissioner, Lorne Green, earlier this year, each dog will be allocated a ‘PD’ number displayed on a brass collar tag and also on a tactical velcro patch to attach to a harness.

The decision to allocate collar numbers to each of the 24 dogs currently serving across both Norfolk and Suffolk constabularies follows the introduction of Finn's Law - named after a Hertfordshire police dog stabbed in 2015.

Police dog Finn sustained life threatening injuries while he and his handler were attempting to arrest an offender. The offender was charged with Actual Bodily Harm on handler PC David Wardell but only a charge of criminal damage was given for the injuries sustained by Finn.

PC Wardell has since campaigned to get working dogs within the emergency services protection whilst on duty, and the new legislation now makes it harder for those who harm service animals to claim they were acting in self-defence and increases the sentences which can be imposed.

Norfolk PCC Lorne Green, who has championed more protection and recognition of police dogs, said: "Police dogs and their handlers play a vital part in fighting crime and keeping us safe.

"They make a hugely important contribution to policing and, thanks to the introduction of Finn’s Law, they are now better protected legally. By now assigning them PD numbers, we are making a public declaration of how much we value them and appreciate the work they and their handlers do.”

Norfolk’s Temporary Superintendent Kris Barnard said: ‘Giving collar numbers to our hardworking service dogs is in an effort to recognise police dogs as truly being part of the policing family. We must reflect on how much they are valued.

"Not only members of staff but members of the public often express interest in new dogs, good work and retiring dogs - this will allow a more formal marking of key events for dogs as well as their handlers.”