Norfolk's Police and Crime Commissioner has joined emergency services colleagues from across Norfolk to urge people not to drink or take drugs and drive this festive season, and beyond.

The annual initiative, which launched yesterday, continues until Saturday 1 January, in conjunction with a UK-wide operation led by the National Police Chiefs’ Council.

The month-long campaign will see Norfolk officers carrying out roadside checks throughout the day and night, including early morning checks, as well as intelligence-led enforcement activity. 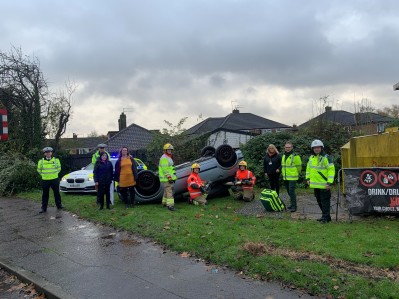 This year, as part of the launch, the Norfolk Fire and Rescue Service staged a ‘mock’ collision outside Sprowston Fire Station in a bid to raise awareness of the consequences anyone could face through drink or drug driving.

Norfolk’s Police and Crime Commissioner Giles Orpen-Smellie said: "Watching a reconstruction of a road traffic collision should serve as a wake-up call for many. Such a demonstration shows what amazing emergency services we have in Norfolk and I am proud of the role my policing colleagues play in helping those when they need it the most.

"However, the message is simple, there is no excuse. Please don't take the risk of drinking or taking drugs and then driving. If you can't do it for yourself, do it for your family and friends as no-one deserves to get a knock on the door to tell them their loved one has been involved in a serious, or even worse, fatal collision."

Similar crash scenes will be created at various locations across the county throughout the months of December and January, in order to have a lasting impact on drivers who may pass by during the Christmas and New Year’s period. These include sites at:

Inspector Simon Jones from Norfolk Constabulary's Joint Roads and Armed Policing Team, said: “Drink or drug driving can and often does have fatal consequences and we hope these staged crash scenes will help to reinforce this message to passing drivers.

“We, as the emergency services have to deal with these devastating situations too often, which is the focus behind these awareness campaigns, to reduce the amount of people seriously injured or killed on our roads.

“However, our experiences as officers dealing with drink drivers in particular tells us that it is often just ‘one or two’ extra drinks that can have a lasting impact on your day-to-day life. We often deal with offenders, who are unaware of the fact they are over the limit, and within a matter of weeks, they lose their licence, their income, their independence which inevitably filters through into relationship issues and more.

“This year we are asking you to consider whether it is worth it. For an extra drink?

“Our message is clear, there is #NoExcuse for getting behind the wheel after having taken drugs or excess alcohol."

Last year, in Norfolk, 46 drivers provided positive alcohol readings, while eight people failed to provide a specimen and four people were prosecuted for being unfit to drive through drink or drugs. Some 28 people failed roadside drug tests. A total of 86 motorists were arrested throughout the campaign.

Norfolk’s Assistant Chief Fire Officer Tim Edwards, said: “Every day we deal with the consequences of poor driving, as do our communities across Norfolk. There really is no excuse for getting behind the wheel after drinking alcohol or taking drugs. Taking this action could kill or seriously injure yourself and innocent victims, as well as having lasting effects on all involved, including witnesses and victims’ families and friends. It could also cause you to lose your job, home and more. Use an alternative way to get home after a night out. It’s your choice- make the right one.”

For more information on the campaign visit the police website