Police and communities are joining forces in the fight against crime thanks to a funding programme launched by the county’s Police and Crime Commissioner (PCC).

Speeding and anti-social behaviour are some of the issues being targeted through new initiatives drawn up by Norfolk’s neighbourhood policing teams, in partnership with their communities, to tackle local crime and community safety priorities.

Six policing projects have so far been successful in securing funding from PCC Lorne Green, who has pledged to increase engagement between the police and communities across Norfolk.

PC Jim Squires, South Norfolk Engagement Officer, said: "We have a number of Community Speed Watch groups within South Norfolk and the Specials will be supporting the work they’re doing by carrying out additional checks on top of those conducted by volunteers.

"The team will carry out a leaflet drop in the immediate vicinity of where speed checks take place, updating local residents on the results and action we’ve taken.”

Attending the launch in Poringland, the PCC said: “I regard it as an essential part of my duty as PCC to find out about issues affecting our communities, and to bring the police and public closer together. 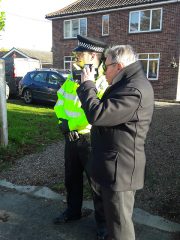 “Norfolk residents tell me that, while they appreciate the financial pressures on our police and understand that the investigation of crimes like child abuse, domestic violence and rape has to be a priority, having police tackle the issues which affect their communities on a daily basis is important too in helping them be safe and feel safe.

“I want to encourage and inspire police and local communities to work more closely together to address the problems in their area and, where I can, I will support them in that effort.

“I am delighted to have been able to support the Special Constabulary Speeding Team project in South Norfolk and to see it embraced by police, volunteers and the wider community. It’s a prime example of how, together, we are advancing the fight for improved road safety in Norfolk. We’ll be launching a similar scheme in Great Yarmouth in the not too distant future to target speeding in the borough’s rural villages.

“The purpose of these Speed Watch schemes is not to spoil our pleasure in responsible driving, but to protect us from unsafe driving. This is community spirit at its best – cooperation between local volunteers and our police to keep our roads safe.”

Other initiatives receiving financial support from the PCC include a community art project led by police cadets in Thetford to tackle vandalism and graffiti in the town, and an engineering training course on offer to young people in West Norwich to reduce anti-social behaviour (ASB) and safety issues related to use of motorcycles in the area.

A bid from the Fakenham policing team to relocate CCTV monitoring equipment has also been successful. As well as reducing disruption to those working in the town council premises where the equipment in currently located, the move to Fakenham police station will address CCTV access issues out of office hours, helping with prevention, detection and investigation of crime, especially related to the town’s night-time economy.

The PCC has also helped fund a coordinator for the Great Yarmouth Early Help Hub which is a partnership of practitioners from different agencies who work side by side to share information, advice and practical support. The Coordinator, who is yet to be appointed, will work to solve local ASB problems, improve information sharing on drug issues, ensure early help cases are risk assessed and link in with children’s services, local policing teams and schools.

PCC Lorne Green has invited policing teams across Norfolk to bid for a share of the total £240,000 funding pot, which will be divided across the seven policing districts to support them in tackling local crime and community safety priorities. A number of applications are currently being reviewed by the PCC ahead of funding decisions being made.