Norfolk's PCC accompanies officers on the beat in King’s Lynn

Norfolk’s new Police and Crime Commissioner (PCC) Giles Orpen-Smellie accompanied officers on the beat in King’s Lynn yesterday to learn more about crime and policing issues in the area.

Giles’ tour of the town came just five weeks after officially being sworn in as the county’s PCC.

During his first few weeks in the role Giles has been meeting with senior police officers and staff, partners and stakeholders as well as members of his own team from the Office of the Police and Crime Commissioner for Norfolk (OPCCN), to find out more about the work taking place behind the scenes to ensure Norfolk remains a safe place in which to live and work.

The PCC is however keen to hear first-hand from officers on the ground about the valuable work they are doing to reassure their local communities, as well as hear from members of the public about what matters most to them about policing in their area.

“I will soon be launching my Police and Crime Plan consultation, asking the people of Norfolk about their priorities for policing in their communities, which will form a big part in setting the direction for policing in the county in the coming years,” said Giles Orpen-Smellie.

“During the last few weeks in post, I have had the pleasure of meeting numerous officers, police staff and partners to find out more about the vital work going on in areas including community safety, criminal justice and victim support. 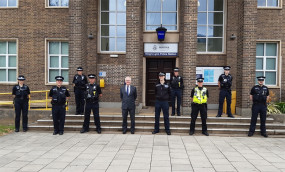 “A vital part of my job however is public engagement, and I have been very much looking forward to getting out and about with officers and learning first hand the daily challenges they face and their key work with local communities.

“It was equally a pleasure to meet with members of the public to hear what matters most to them about crime and policing, in this case in the King’s Lynn area.”

During his visit the PCC met with the district command team for King’s Lynn, West Norfolk and Breckland, attended officer briefings and spent the afternoon out on patrol in the town centre with local beat manager PC Mike Hopkins (pictured below) to understand the impact of anti-social behaviour (ASB) on businesses in the area. 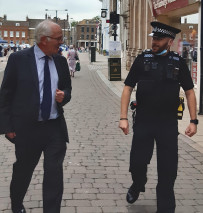 Giles also accompanied PC Nick Brennock, beat manager for Gaywood, Fairstead and Reffley, on patrol and met local councillor Sandra Collop to discuss an ASB hotspot in Reffley Woods. The PCC was advised how PC Brennock had been working closely with the local community, including young people in the area, to resolve the issue.

The visit to the town was the first of many planned for across Norfolk by the PCC in the next few weeks and months.

Giles’ next engagement visit will be at the Morrisons store in Blackbird Close, Bradwell between 10am and 12 noon on Wednesday 23 June 2021.