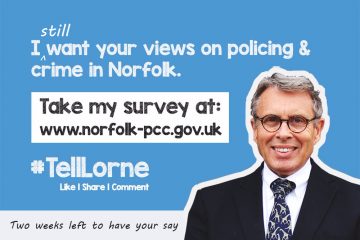 With two weeks to go before his public consultation closes, Police and Crime Commissioner Lorne Green is urging all Norfolk residents to share their views and help shape how crime and disorder are tackled over the next four years.

The Commissioner who, as well as running a short online survey, has been discussing crime and policing with community groups across the county, particularly wants to hear from residents in the districts of Great Yarmouth, King’s Lynn and West Norfolk, and North Norfolk.

“As PCC I am responsible for setting the direction for how we, as a county, tackle crime and disorder and keep our communities safe” Lorne said. “I want that direction to be shaped by the views and needs of Norfolk’s residents.”

“More than 2,000 people have shared their views on crime and policing with me so far, and had their say on what my priorities as PCC should be.

"There are some clear priorities for Norfolk people emerging from the responses I’ve had to-date, but to say what they are at this stage would risk influencing the responses of those who haven’t yet had their say. Once the consultation closes, I’ll publish all the details on the Norfolk PCC website.

“There’s still time to make your views count. I’d particularly like to hear from more people living in the Great Yarmouth area, in North Norfolk, and in King’s Lynn and West Norfolk.”

The PCC’s eight-week consultation will close on 12 August, at which time Lorne will use the feedback received to develop Norfolk’s Police and Crime Plan. That plan will set the county’s overall crime and policing priorities, as well as setting out the resources that will be made available to the Chief Constable and how policing performance will be measured.

The PCC’s online survey runs until the consultation closes on 12 August. People are also invited to email, telephone and write to the PCC to give their views.