The #Impact campaign has kicked off its new academic year tour this week with a visit to Sheringham High School. 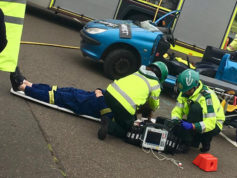 The campaign, which delivers hard-hitting road safety messages to young and future drivers, has been touring schools and colleges across Norfolk since it was launched by the county’s Police and Crime Commissioner (PCC) almost three years ago.

Since then, nearly 6,000 young people have been involved in the initiative which is actively supported by Norfolk Constabulary, Norfolk Fire and Rescue Service and the East of England Ambulance Service.

During the last school year, the partnership team delivered 18 ‘crashed car’ demonstrations. As well as showing students the stark reality of what can happen when things go wrong behind the wheel, volunteers get to experience being freed from a vehicle by the emergency services, being questioned by police and facing arrest.

PCC Lorne Green said: “I take very seriously the pledge I have made to do all I can to prevent young people being seriously injured or killed on our roads.

“Thanks to the dedication of the #Impact team, and the backing of colleges and sixth forms across Norfolk, this campaign has gone from strength to strength. Academic settings across the county are now inviting the #Impact team back year after year.”

Temporary Superintendent Kris Barnard from Norfolk Constabulary, said: “We are absolutely committed to working with our partners to do all we can to positively affect driver behaviour and improve road safety. Sadly, young drivers are disproportionately represented in casualty statistics.

"The #Impact campaign has allowed us and partners to outline to young drivers and those about to take to the roads the importance of driving at an appropriate speeds, wearing a seat belt, not be distracted and also ensuring you are in a good condition to drive and not affected by drink or drugs.”