An innovative project aimed at improving care for people with mental health problems in Norfolk has been given a welcome boost by Police and Crime Commissioner (PCC) Lorne Green.

The PCC has funded the appointment of an additional mental health nurse in Norfolk Constabulary’s control room to supplement the current five nurses.

As well as providing professional help and support to callers at pivotal times, this new post will allow a nurse, on occasion, to be deployed directly to the scene of incidents, helping to further reduce demand on the police service.

The new post will also assist the Constabulary with extra mental health awareness training and be available to Norfolk Constabulary officers and staff in need of advice and support.

Lorne Green, said: “The establishment of such a dedicated team of mental health nurses within the police control room has proven a real success and I recognise their hard work and dedication.

“The increased support I am providing will strengthen our commitment to helping some very vulnerable people while easing ever-increasing demands on our officers and staff.

“By adding to the team, we will also be able to provide better mental health support for our officers and staff who, through the challenges of policing, are often subject to situations of great complexity, danger and stress.”

The initial pilot scheme was launched as a joint venture between Norfolk and Suffolk NHS Foundation Trust and Norfolk Constabulary in March 2014. Due to its success it was expanded in October 2014 thanks to extra funding from the Office of the Police and Crime Commissioner and the Home Office.

The mental health nurses have been working alongside control room staff to offer assistance to vulnerable callers. They have immediate access to health records and, by using their expertise in mental health care, can make on-the-spot professional assessments and decisions, which could involve arranging alternative options to the attendance of a police officer.

Chief Constable Simon Bailey said: “The introduction of mental health nurses in our control room has been a real success, offering assistance to call takers who often deal with vulnerable members of our society. To be able to add another nurse to our ranks to also support our staff’s wellbeing will help enable them to provide a top quality service to the people of Norfolk.”

Figures reveal that between 28 October 2014 and 20 December 2016 a total of 188 Section 136 detentions by the police in Norfolk have been prevented as a result of the control room initiative.

Under the Mental Health Act, a Section 136 detention involves the police detaining someone who is deemed to have a mental health need and requires immediate care or control. 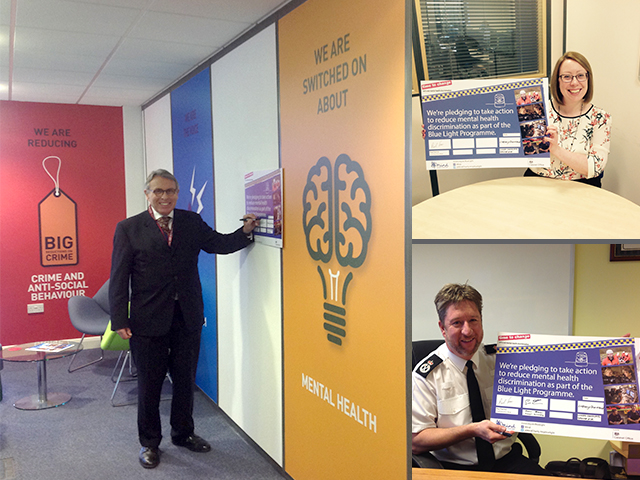 The new funding comes as the Police and Crime Commissioner, the Chief Constable and the Director of Human Resources further demonstrated their commitment to promoting the mental health and wellbeing of employees with the signing of a pledge.

Independent research done by Mind has shown that members of the emergency services are more at risk of experiencing a mental health problem than members of the general population, but are less likely to seek support.

The charity therefore set up its Blue Light programme to challenge the stigma that can still be associated with being open about mental health, and offer support to members of staff who work in the emergency services when they need it.

PCC Lorne Green, said: "I welcome the opportunity to sign the Blue Light Pledge alongside the Chief Constable and Human Resources Director. It is crucial we work together to break down barriers and offer officers and staff all the support they may need.”

CC Bailey added: "I recognise that our officers and staff carry out often unrelenting roles so it’s vital that the Force is there to support their health and wellbeing should they encounter any difficulties in their lives. So I’m very pleased that we get the opportunity to do this by signing the Blue Light Pledge.”