A project which aims to improve the well-being and mental health of prisoners with a little help from a few four-legged friends has been praised for its success.

The Rescue-Rehab project was launched at HMP Norwich as an initial 12-week pilot in December 2016 - based on its success, Norfolk’s Police and Crime Commissioner Lorne Green pledged extra funding until the end of April 2020.

The scheme sees homeless dogs from local re-homing facility Meadowgreen Dog Rescue Centre, paired with suitable prisoners, who with assistance from a qualified trainer, work alongside the dogs to help boost their social skills.

Since its launch the initiative has proven to be a vital lifeline, not only for the prisoners involved but also for the 31 dogs which have taken part in the scheme to date and all been rehomed.

PCC Lorne Green, said: “This project has proven to be a true success not only for the prisoners involved but also for the dogs and the local community.

“It is about creating hope for all and with hope comes healing and hopefully a more positive path for those eventually leaving the prison walls.

“We have broken new ground in helping to turn prisoners’ lives around and I am delighted we have been able to fund such a worthy scheme.

“If we can turn around just one life it’s worth it. Everyone benefits.”

Since September 2018 the project has run 16 courses out of the 72 students who enrolled during this period 46 completed their course – 64%.

Reasons for not completing included getting a new job on the wing, taking part in another activity or being released.

Each attendee received certificates in areas of dog handing, training and socialisation and many have seen an increase in their confidence, well-being, mental health and self-motivation.

Rescue-Rehab leader Michele Neave, said: “We knew from the very beginning that dogs in dark places and men in dark places had much to offer each other. That conviction has not changed, to quote one of our students ‘everyone deserves a second chance, these dogs are like us’.

“Bonds are formed and because they learn to care change happens.

“The success of this project has been greatly enhanced by the collaboration and support of HMP Norwich, PeoplePlus, Meadowgreen Dog Rescue and, of course, the Office of the Police and Crime Commissioner for Norfolk.

“The project has delivered on many levels, helping improve the mental health and well-being of participants while giving them confidence to take part in further education and training opportunities in custody in preparation for release.”

The impact on the prisoners who have signed up to the initiative has been highlighted in both Rescue-Rehab’s Annual Report and Final Report.

Governor Martin Edwards, from HMP Norwich, added: “Within the custodial environment the benefits are many, both to dogs and participants.

“We should never underestimate the impact, benefit and feeling of wellbeing for prisoners who have taken a role in this process, raising self-esteem, confidence, self-worth and giving a sense of purpose that at times can be lost whilst in custody.”

“As a chaplain, I have regular contact with many prisoners, frequently those with particular challenges, and I am able to relate to those prisoners in a way which is very different from the way other prison staff operate.

“My observations have been confirmed by those of the officers and other staff who have day-to-day contact with prisoners.

“This is not to say that it is a panacea: it is not. But it is a very useful tool in an all-too-sparse toolbox that has real, meaningful, and measurable results.”

And as for the dogs….

“A 100% rehoming rate with no returns is, perhaps, all we need to say regarding the four-legged participants,” added Michele Neave.

“Our much-valued and trusted working relationship with Meadowgreen Dog Rescue has grown over the period of this project.

“They are essential to the success of Rescue-Rehab and their dedication and commitment resonates within the walls of the training room. Rescue is a revelation and inspiration to the students.”

Funding has been secured for the project for the next financial year. The initiative is however currently on hold due to the current restrictions around prison visits due to the pandemic.

Matthew enrolled on Rescue-Rehab in October last year. As a repeat offender with a long sentence, he was resigned to keeping his head down and doing his time but as a professed dog-lover Matthew decided to join the course.

It was immediately clear he had a genuine love of dogs and showed a real interest in learning, he enjoyed the chance to work alongside a qualified trainer but initially showed some reticence.

He was encouraged and praised for his positive work and gradually something changed. Matthew began to see the course as an opportunity and a chance to contribute and his confidence rocketed.

Course leaders suggested that he take the mentoring course and he has continued as a mentor for others seeing the ‘real value’ in the experience. They are proud of his journey and his continued progress and the dog he has been paired with has demonstrated clear benefits of training.

Matthew’s confidence has grown since embarking on the course he is more engaged and open to learning. He has seen the potential in training and taking a leadership role that hopefully will stay with him ‘outside the walls’.

*Matthew’s name has been changed to protect his identity. 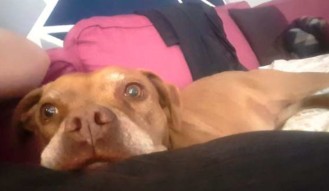 “‘Sweet Rosie' joined our family a couple of weeks before lockdown. This was a blessing at such a stressful time and she has certainly brought a ray of sunshine into our lives.

We thank everyone who has been part of her training and rehabilitation to make it possible for her to be adopted.

Rosie certainly makes us laugh with her antics. We call her ‘rough house Rosie’ (she’s a wrecking ball), but also a diva at times….

Overall, Rosie has adapted well: loves the sofa and the beds, loves her food and her new family. Thank you all once again for giving Rosie the chance of her own family to love.”

A few pictures taken of some of the four-legged graduates during lockdown: