A specialist team dedicated to tackling child exploitation in the county has been nominated for an international policing award.

The Multi-Agency Criminal Exploitation (MACE) Programme Board has been shortlisted as a finalist for the World Class Policing Awards in London.

The board is funded through the Home Office’s Early Intervention Youth Fund (EIYF) to lead the county’s response to child criminal exploitation through a range of projects. 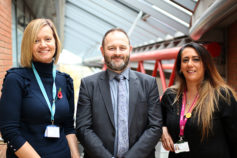 Partners on the board include the the Office of the Police and Crime Commissioner for Norfolk (OPCCN), Norfolk Constabulary and Norfolk County Council, who will be sending representatives to the awards tomorrow evening.

Amanda Murr, Senior Policy Officer for the OPCCN, who sits on the board, said: “We are delighted the work of the OPCCN and all our partners has been acknowledged in this way.

“It is an honour to be asked to attend the awards particularly given the quality of the competition.

“It is imperative we work together to tackle child criminal exploitation in the county. Only by working in partnership can we effectively address the issue and help give young people in Norfolk a brighter future.”

The World Class Policing Awards have attracted nominations from across the globe for tomorrow evening’s event, including from police forces, the third sector, commercial organisations and academic institutions.

The awards celebrate and acknowledge the best in all aspects of 21st century policing with a total of 54 nominations recognised in nine separate categories.

In total, six project streams have been developed by the Office of the Police and Crime Commissioner, in collaboration with partners including Norfolk Constabulary and Norfolk County Council under the EIYF.

Launching the suite of projects earlier this year Norfolk’s PCC Lorne Green, said: “Child exploitation, gangs, drugs, knife crime – these are not exclusively ‘policing issues’ and they will not be solved through enforcement alone. We’re talking about societal problems; problems we are all concerned about and that we all have a responsibility to play our part in addressing.

“These projects highlight all that is good about partnership working – bringing together organisations from all sectors to tackle the issue from root to branch, and pooling skills, resources and expertise from across the county.

“Together we are much better placed to disrupt the activity of those who seek to exploit our young people, by building their resilience, safeguarding and showing our young people that their future can be so much brighter.

“We want to send out a message to criminals intent on targeting our young people that Norfolk is not a soft target.”

Detective Superintendent Andy Coller, who is Co-Chair of the MACE Board alongside Sarah Jones from Norfolk County Council’s Children’s Services, said: "Child Exploitation is an issue for all of society and needs to be tackled collaboratively.

"For me this nomination is recognition of the excellent partnership work that is taking place in Norfolk via the MACE Programme Board and I am especially pleased to be able to represent Norfolk Constabulary at the awards ceremony alongside my colleagues from Norfolk County Council and the OPCCN."

The awards will be held in London on Thursday 14 November.

Recognise examples of “world class” policing Celebrate excellence in policing, both in the United Kingdom and around the world Encourage modern, progressive, collaborative and effective policing Showcase individual, team and organisational achievement and success Promote the sharing and delivery of innovation and good practice