A team which provides intensive one-to-one support to high-risk victims of domestic violence in Norfolk has received a funding boost from the county’s Police and Crime Commissioner (PCC) to help it cope with demand for its support services.

Independent Domestic Violence Advocates (IDVAs) play a vital role in the county’s response to tackling domestic violence in the county, focusing on those individuals considered to be at the highest risk of harm. Using specialist skills and expertise, they work closely with victims to assess risk and develop safety plans, offer emotional and practical support, and help guide victims through the criminal justice system. 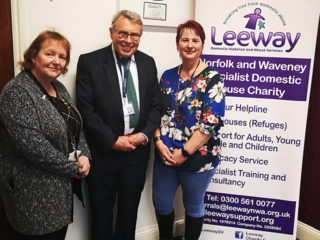 Having visited Leeway to meet with the professional case workers who make up the IDVA team, the PCC has today announced that he will be increasing his funding of the service - for the second year in a row - to take the number of IDVAs from 12 to 14.

“Domestic abuse is one of the largest single crime types affecting our county, with Norfolk Police taking over 50 domestic abuse-related calls every day. As awareness of domestic violence and, along with it, reporting of offences have increased, the demand for support and safeguarding of survivors has risen significantly.

“Norfolk’s dedicated and highly trained IDVAs are delivering a crucial service to those survivors assessed as being at the highest risk of serious harm. They do a brilliant job under extraordinarily challenging circumstances. Having recently met with the IDVA team, I do not underestimate the impact that the increasing demand for their support services is having on their individual caseloads.”

The difference the IDVA service makes to its clients

"I'm feeling more and more confident. I can't believe the difference it has made to all my family."

"You have helped me so much. I would not have had a clue what to do."

"You gave me a lot of strength when we met. I really felt I had support. I haven't truly had that before and I can't thank you enough. It's life-changing."

This is not the first time the PCC has increased his funding of the IDVA service to enable the team to grow in size. For 2018/19, in response to the number of referrals to the PCC-funded IDVA service having increased by 42% since 2016, Lorne extended his funding for the then 10-strong IDVA team. That extra funding enabled two extra IDVAs to be recruited, resulting in a reduction of the individual caseload per IDVA but, over the last 12 months, the number of referrals has increased again.

“As PCC, I am committed to supporting victims of crime in our county and doing all I can to reduce the harm they experience and help them cope and recover. To ensure the IDVA team can continue to give their best to the people who need their help and support, I will again be increasing my funding of Leeway for this year to allow for the recruitment of a further two IDVAs.”

Mandy Proctor, Chief Executive of Leeway Domestic Violence and Abuse Services, said: “We are delighted that the PCC has announced an increase in funding for our IDVA service, which has seen an increase in referrals in the last year.

“The service provides vital support to those identified to be at high risk of significant harm, working with partner agencies to reduce the risk and empower service users to start a new life free from abuse.

“I would like to thank Lorne Green for his continued support of Leeway and the work we do, as well as his dedication towards tackling domestic abuse in Norfolk."

PCCs are responsible for commissioning victim support services in their police force area and receive dedicated funding from the Ministry of Justice for that purpose. Norfolk’s PCC allocates an annual grant of £360,000 per year to fund the county’s IDVA service provided by Leeway Domestic Violence and Abuse Services. For 2018/19, the PCC increased that grant by £75,000 per year to fund the recruitment of two additional IDVAs bringing the IDVA team from 10 to 12. For 2019/20, the PCC has announced he will be increasing the annual grant by a further £60,000 for the purpose of funding an additional two IDVA posts.

More about the IDVA service
"As IDVAs, we offer a specialised support service for those who have been identified to be at high risk of significant harm or homicide from their partner or family member.

We work with multiple agencies to reduce risk for a person who is experiencing domestic abuse. We advocate for their thoughts and feelings and express those within the MARAC (multi-agency risk assessment conference) so that other agencies get an understanding of the impacts that domestic abuse has had on the victim within that relationship.

Not only is it terrifying for a victim to go through domestic abuse behind closed doors, it can also be terrifying when agencies become involved for the first time, especially when the victim has to speak out about their experiences to those they have not met. The IDVA will build that rapport and trust, and empower the victim to make positive steps forward to break the cycle of abuse.

Whether it is support with housing, finances, child contact arrangements, speaking with the police, court support through the criminal/civil court, protection orders or general support to start afresh, the IDVA will work quickly to tailor an individual support plan for each person that comes through to the service.

Once the risks have been reduced and the support needs have been met, the IDVA will signpost/refer to other agencies that will continue to work with those affected by domestic abuse.”