Members of the public are needed to become Independent Custody Visitors, working in pairs to make unannounced visits to police cells to check on detainees, inspect facilities and report on their findings.

The Scheme, managed by Norfolk’s Police and Crime Commissioner Lorne Green, is made up of four panels of volunteers, assigned to carry out visits at Norfolk’s Police Investigation Centres in Wymondham, Aylsham, King’s Lynn and Great Yarmouth. 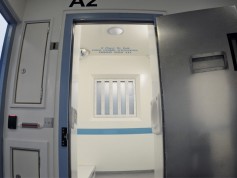 PCC Lorne Green said: “Unless you’ve spent time in police custody, you’ve probably not heard of these unsung heroes, but what they do benefits a section of society most people wouldn’t give a second thought to.”

“Their work is largely unseen despite hours of effort, but the role they play is a crucial one, offering public reassurance that people detained in police custody in Norfolk are treated fairly, in accordance with the rules and with respect for their human rights.”

Last year, the 20 volunteers who make up the Norfolk scheme visited more than 600 detainees. Custody visitors make a report of each visit before leaving the custody facility which is then sent on to the PCC’s office for follow-up and monitoring. No issues of serious harm or threat were reported in the last 12 months.

Tom Foster, a volunteer on the Great Yarmouth visiting panel, said: “It’s not our business why the people are in custody; our focus is on their health and wellbeing and whether they’ve been offered their legal rights and entitlements. Safeguarding is the primary aim of what we do – not just of the people being detained by police, but also of the police service itself.”

“We are the eyes and ears of the public and the PCC. The closest most people will get to looking behind the cell door is watching ‘24 hours in police custody’. We are in the custody suites, visiting detainees every week of the year, reporting on what we see and offering public reassurance that the police are treating people with fairness and respect.”

While applications to join any of the four visiting panels are welcome, the Scheme is in particular need of more custody visitors in the Great Yarmouth area.

To apply, you must be over 18, live in Norfolk and have lived in the UK for more than 3 years. Although this is a voluntary role, expenses are paid and full training is given.

More information and application details can be found on our Custody Visiting page.

To mark the launch of Volunteers’ Week, Lorne will be meeting with Norfolk’s Custody Visitors and other volunteers managed by the PCC office on Wednesday. He will be presenting long-service awards to three custody visitors from the King’s Lynn panel in recognition of their 10 years of service. In total, Norfolk’s custody visitors have given 145 years in voluntary service.