Domestic abuse awareness and mental health have been cited as the main concerns among children and young people during the pandemic.

The findings have been highlighted in a report carried out by the Police and Crime Commissioner Lorne Green’s Youth Commission (YC).

The group launched its six month-long Covid-19 Project - conducted in the form of a consultation - on 1 May following the nationwide lockdown.

Since this time the Commission has completed two reports; the first identifying the main worries among young people, the second highlighting how the area of most concern - domestic abuse - could be tackled.

PCC Lorne Green said: “I am immensely proud of the work my Youth Commission has been carrying out over the past few months.

“It has been and remains a hugely unsettling time for young people in Norfolk and it is crucial we discover how the pandemic has impacted on their lives and how we can best assist them in the future.

“Reducing vulnerability and supporting victims is one of my key priorities in my Police and Crime Plan and any work which can be done to raise awareness of domestic abuse among young people and beyond must be welcomed.” 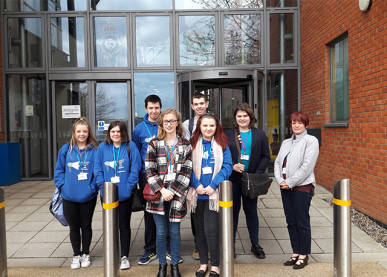 The YC currently has around 50 members (some pictured left before lockdown), 20 of whom have been taking part in the three strategic project stages working with organisations across Norfolk in a bid to gain as much feedback as possible from peers.

Organisations have included Norfolk’s Youth Advisory Boards (YABs), The Matthew Project, Your Own Place, The Magdalene Group, Bridge in to Community and Moore Networking which helps young people with additional support needs into apprenticeships.

Covid-19 has changed many things, but the Commission has continued to play a vital part as a communication channel for young people across Norfolk.

The feedback will help inform the wider work of the Office of the Norfolk Police & Crime Commissioner (OPCCN) which commissions victims’ services across the county including organisations which support victims of domestic abuse.

The consultation focused on how young people view subsequent impact of the pandemic on policing, crime and vulnerability.

To date the project has also included feedback from external partners who are keen to support the Commission and their work with young people. Legal professionals, specialist support providers for vulnerable groups and organisations who work with young people seeking employment and training are among those who have taken part.

Having published the first two reports the Commission are now moving into the final phase of their project with a view to publishing a final report by the end of this month.

The Phase 1 report gave the Commission a broad overview of the key concerns among young people including:

• Adjusting to the lack of freedom

• Filling time and lack of routine

Domestic abuse and safeguarding were however cited as “a major concern”.

The report stating “..there is still a lack of understanding about this i.e. what is abusive behaviour, when does caring become controlling?....”

“There seems to be a lot of information being aimed at school age and adults but there is a gap in communication for 16-24 year olds and current campaigns may not be effective in capturing their attention.”

In the Phase 2 report the team looked at the top topics raised in the Phase 1 and decided that the focus going forward needed to be on a domestic abuse awareness campaign and children and young people contribution to mental health services.

Jacqui Starling, who runs the YC, said: “The Youth Commission has done a great job at identifying gaps in how important information reaches young people, and it gives us a call to action on making sure that the connection between unhealthy behaviours in young relationships and domestic abuse is highlighted."

Youth Commissoner Holly Edison, aged 22, added: "I wanted to get involved in the PCC Youth Commission Covid-19 project in order to give young people a voice in the chaos that was the Covid-19 lockdown - an environment filled with confusion and overpowered by adults voicing opinions on subjects that did not affect them or they did not understand.
"Young people and their futures have been massively affected by the pandemic and it is so important they are given an opportunity to have their concerns, worries, and aspirations heard.
"Domestic abuse is a massive issue in modern society - so many young people have been abused in a relationship or within their own home without even realising and this needs rectifying through awareness raising and education."
Who are the Youth Commission?

Set up in 2017 by Lorne Green, the PCC’s Youth Commission, which now has its own Facebook account is a diverse group of young people, aged between 13 and 25, from all over the Norfolk policing area.

By being part of the Youth Commission, its members help shape decisions about crime and policing, supporting, challenging and informing the work of the PCC.

The Youth Commission has been established to enable young people to voice their opinions and be heard. By sharing their views and experiences of crime, policing and criminal justice system, the Commission seeks to ensure local decision-makers not only understand young people’s needs but are also working to meet them.

Through peer research, members take the work being done by the Commission to a wider youth audience, encouraging participation, gathering information and drawing conclusions to inform the recommendations they make to the PCC.

More information on the project

Any young person interested in joining the Youth Commission can contact Jacqui Starling at Lola Stafford Consulting via Jacqui@lolastaffordconsulting.co.uk