An innovative project to educate young people about the dangers of knife crime has received positive feedback only six months after being launched in the county.

The StreetDoctors initiative was rolled-out in Norfolk in March this year after receiving vital funding from the county’s Police and Crime Commissioner Lorne Green.

The initiative was introduced as part Lorne’s commitment to preventing offending and reducing vulnerability and more than 100 young people from Norwich and Great Yarmouth area took part in the first training sessions.

As well as teaching teenagers life-saving first aid training the project, delivered by registered charity StreetDoctors, provides those taking part with education and advice, with the aim of changing attitudes towards violence and helping them take responsibility for their own actions.

Positive feedback from some of the young people attending the sessions included:

“It helped me to know what to do in that situation.”

“The session was good, really enjoyed it, nice people and found out how to help a person when he is stabbed.”

“This session was very useful it taught me what I need to do in different scenarios.”

“It made me realise the dangers of carrying a knife.”

“Scary how wrong it can go, told me things I did not know.”

Lorne, said: “It is the first time the project has been delivered in East Anglia and I am delighted to see such encouraging feedback from so many young people.

“When it comes to tackling any kind of crime, preventative strategies have a vital part to play and it is reassuring to see the project has already had a positive impact on those taking part.

“It’s crucial we educate our young people about the dangers of knife crime – whether as a victim or an offender.

”These are life-saving skills we are developing, alongside an awareness and understanding that individual actions have consequences. Where knife crime is concerned, those consequences, for all involved, can be severe.” 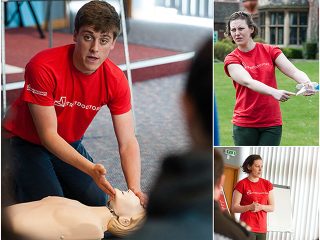 The next sessions for the Constabulary-led project, supported locally by the Norfolk Youth Offending Team, are due to be held in April next year.

Chief Inspector Nathan Clark said, “The street doctors were fantastic and really understood the audience. It was a great opportunity to engage with children and see how their perception of knife carrying changed before and after the training.

“The project is a great opportunity for us to tackle knife crime which can have devastating, even fatal consequences.

“Clearly we aim to tackle this through enforcement, arresting and prosecuting people found in possession of knives and those who use them. However, enforcement alone will not solve this and education and awareness is also key.

“A lot of young people we deal with simply don’t understand the serious consequences of their actions and I believe the input from doctors will help them face the realities that knives can take lives.”

The StreetDoctors initiative was one of a number of community policing projects supported through the PCC’s Early Intervention Fund - made available to policing teams across the county to help them work with communities to tackle local crime, disorder and community safety issues.