Norfolk Constabulary is using specially liveried police vehicles in a bid to raise public awareness of modern slavery thanks to funding from Police and Crime Commissioner Lorne Green.

The vans – which can be seen across the county - also carry the number of the national Modern Slavery Helpline (08000 121 700) to encourage people to report any concerns or seek free and confidential help and advice.

It follows a number of successful pilots across the country including in Lancashire, Devon and Cornwall where police vehicles have been used to promote modern slavery awareness.

“Supporting victims and reducing vulnerability in Norfolk is a main priority for me as PCC and is also a core aim of my Police and Crime Plan,” said Lorne.

“Modern day slavery is a reality here in Norfolk. These are vulnerable people living in our communities, people who are often too frightened to speak out.

“A significant priority for us is rescuing and referring victims: making sure people being exploited by organised criminals receive the help and support they need and deserve. 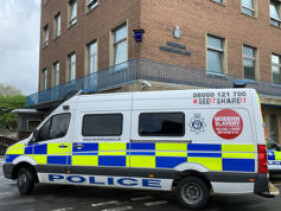 “However, we cannot do this alone - together we can all help make a difference.

“We are asking the public to be the eyes and ears of their local community, particularly in the current climate, to help identify where such exploitation is taking place to help prevent such a ‘hidden’ crime which is traditionally under-reported and, crucially, to support those who are victims.

“We know that modern slavery and exploitation is under reported and we are keen to encourage more people to recognise the signs. We hope these specially liveried police vehicles will help to raise awareness among the public and ensure we can tackle this crime effectively."

Detective Superintendent Andy Coller, Head of Safeguarding at Norfolk Constabulary, added:  “Modern slavery impacts on vulnerable people and partnership working is key to combating this terrible crime in Norfolk.  We would urge anyone who feels there are hidden victims being exploited, during the Covid pandemic lockdown and beyond, to call the police or the Modern Slavery Helpline number displayed on our vehicles.”

The awareness initiative is one of a number funded by the Office of the Police and Crime Commissioner for Norfolk (OPCCN) to help tackle modern slavery and criminal exploitation in the county.

A partnership to support victims of human trafficking and modern-day slavery was launched in Norfolk in December last year thanks to funding from OPCCN.

The two-year pilot scheme which is co-ordinated by the British Red Cross, aims to develop a Norfolk Anti-Slavery Network, working with partners to ensure best practice and shared learning.

The Red Cross was funded under the £450k Hidden Victims’ Fund (HVF) which was launched in Norfolk by the PCC and aims to support hidden victims of crime and reduce vulnerability.

The Red Cross received £66,155 under the fund after the OPCCN identified a need for additional provision to complement existing networks, for a co-ordinated and strategic response by partner organisations to recognise and support victims.

The Red Cross project was the third to be funded in the county under the HVF.

In early 2019 West Norfolk-based charity the Pandora Project – which works with women and children affected by domestic abuse – received a £214,687 grant to run its three-year ‘Phoenix Project’ which supports off-street sex workers who may be vulnerable to human trafficking or modern slavery.

National charity St Giles also received £89,028 under the HVF and a further £87,737 under the Home Office’s Early Intervention Youth Fund to run its SOS+ Norfolk Project to help young people at risk of criminal exploitation.

The SOS+ Project was launched in the county in April 2019 and nearly 4,000 pupils, parents and teachers have taken part in the initiative led by ex-offender and former boxer Earl Ling.