Norfolk's Police and Crime Commissioner has welcomed the creation of a thought-provoking film being launched in schools across Norfolk to educate young people about knife crime.

The Norfolk Police Safer Schools Partnership will be taking the film to 130 year groups at more than 30 high schools across the county and it will be supported by a presentation about the dangers of knives and other offensive weapons.

The five minute film, which was produced with help from young people from local schools, features a young teenage boy who is being bullied and decides to carry a knife for ‘protection’. 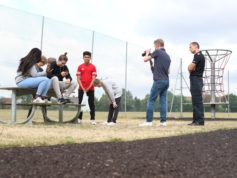 Inspector Bex Brown said: "How the story ends is for the audience to decide. It is left open ended intentionally to get young people thinking about consequences and what could happen in situations like these.

"Knife crime has risen for the first time in England and Wales in four years and statistics show young people aged 13 to 17 are most likely to get caught up in it. Therefore, whilst Norfolk is a safe place to live, it is important to highlight the issues around carrying knives and how easily things can go wrong. We want young people to think about making the right choices as those choices could ultimately end a life or save a life.”

Norfolk’s Police and Crime Commissioner, Lorne Green, said: "Anything which gets the county’s young people talking and thinking about the dangers of knife crime and reflecting on the potential consequences of carrying a knife is to be welcomed.

"I’ve had the opportunity in recent weeks - through my Streetdoctors initiative which encourages young people to re-think their attitude towards violence by teaching life-saving first aid skills - to hear first-hand from individuals affected by knife crime.

"One of the particular strengths of this video is that it is made by young people for young people. At a time when knife crime and its impact on young people is constantly in the news headlines, I hope this tool will be very helpful to our Safer Schools Partnership in spreading these important messages.”