The PCC’s police budget consultation has now closed. Thank you to all those who took part. You can find out more information about Giles' decision on our Police budget and council tax page >>

Norfolk’s Police and Crime Commissioner (PCC) Giles Orpen-Smellie has today launched a public consultation into the proposed budget for policing in the county for the coming year.

The PCC is required by law to set the budget for Norfolk Constabulary and as part of this, determine how much the people of Norfolk contribute to the policing element of the Council Tax they pay.

To inform this decision, Giles is consulting with people across the county.

The consultation will run until 5pm Friday, 14 January and asks residents across Norfolk whether they will support Giles’ proposal for funding.

In the consultation information published today, Giles outlines some of the key challenges facing Norfolk Constabulary in the changing face and complexity of crime.

Being able to respond to the growth in domestic abuse incidents and the need to ensure Norfolk is a safe place for women and girls are amongst the items at the top of the agenda for the PCC, as he also prepares to launch his new Police, Crime and Community Safety Plan in the  spring.

The plan will outline the priorities that Giles will hold Norfolk Constabulary to account for and where investment will be made. 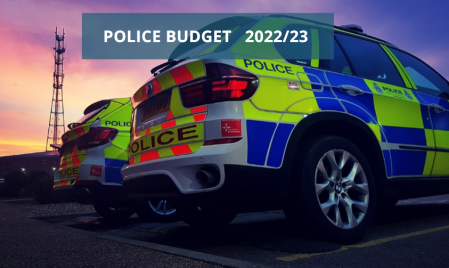 In the consultation document, Giles says: “My Police, Crime and Community Safety Plan will set a specific expectation for the police, in partnership with other agencies, to promote a co-ordinated county-wide response to violence against women and girls and to tackle high harm behaviours and criminality such as domestic abuse, rape and serious sexual offences.

“It is incumbent on me to ensure the police have the necessary funding and resources to do so.”

In the Chancellor’s October spending review, the rise was capped at £10 per year.

“I understand that the last question many people will want to be asked is whether they support additional demands on their household budgets,” said Giles.

“The reality we are faced with is that without an increase to police budgets the constabulary will not be able to maintain either the current level of service or be able to respond to these growths in demand.”

As well as enhancing capacity with a number of officer and staff roles to respond to crimes of violence against women and girls, the PCC outlines the need to enhance drone capacity, which further enables the constabulary to respond to crimes particularly impacting rural communities, a growth in digital investigation resources and the need to ensure the force is able to meet the government’s carbon neutrality targets in its buildings across the county.

“It is imperative that the plans we are making for the constabulary are ones that will support keeping our communities safe and responding to the changing face of crime,” said Giles.

“Norfolk is a safe county to live and work in and I want it to stay that way – we must not lose through not sufficiently funding our police force.”

Paul Sanford, Chief Constable of Norfolk Constabulary said: “The cost of providing effective policing has risen and so have the number of calls for our service.

"Whilst we have seen significant decreases in neighbourhood crimes such as burglary, theft and robbery, crimes committed behind closed doors and particularly domestic and sexual abuse continues to rise.

"I have reviewed every part of our budget to identify savings to meet our financial pressures and allow further investment in the frontline to address growing demands.

"However, the savings that we have found are not enough and I have asked the PCC to consider an increase in precept.  The increase that I have requested is below inflation, but will enable me to make the improvements that are needed in areas such as our response to domestic abuse and serious sexual offences. Without an increase in precept, I will not be able to make the improvements that recent events have shown are critically needed."

Find out more and 'Have Your Say'

Printed copies of the survey and consultation documents are also available and can be requested by contacting the Office of the Police and Crime Commissioner for Norfolk (OPCCN) in the following ways: