More than 80 members of the public attended the county’s first joint police and fire service question and answer session in Fakenham hosted by Norfolk’s Police and Crime Commissioner Lorne Green.

The event offered local residents and businesses the opportunity to ask questions related to both fire & rescue and policing.

A number of policing issues were raised during the evening, held at Fakenham Community Centre, including drink and drug driving, speeding, visible policing, Community Speed Watch schemes and drug crime. Lots of questions were also posed for Norfolk County Council around fire service resource in Norfolk. 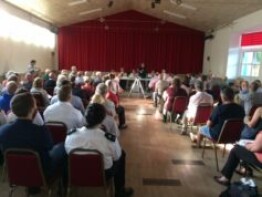 Although the event was the first of its kind involving both Norfolk Constabulary and Norfolk Fire & Rescue Service – it was the ninth Q&A hosted by the Commissioner as part of his ongoing pledge to give the public access to the county’s senior officers while ensuring he and the wider police service are visible, accessible and accountable to all.

Opening the meeting Lorne, said: “We have a really efficient police force in this county in which we can be very proud.

“I am happy to welcome my fire service colleagues. Collaboration between the police and fire service in the county continues to grow as we speak.

“Only recently the fire service moved into the police control room where they work alongside police colleagues.

“I attended my operation #IMPACT road safety initiative for young people in the city centre earlier this month which is a great example of collaboration between the two services. There are a number of ways such collaboration is keeping the costs down for residents in this county.”

The attendees were also given the opportunity to find out about policing in their area, meet senior police and fire officers and raise their crime and policing and fire service concerns.

Getting an overview of police activity and priorities from the District Superintendent Chris Harvey, the meeting heard how there had been a 5% fall in anti-social behaviour incidents (1313 to 1244) in the past year.

Crimes including burglary, drug offences, sexual offences and theft have all seen an increase in 2018/19 compared to 2017/18 in the area however the meeting heard how the district records only 11 crimes a day for a population of around 100,000.

Supt Harvey also praised the work of the Constabulary’s Operation Moonshoot team which he said had proven to be a “phenomenal success” helping to keep crime down in North Norfolk using the Automatic Number- Plate Recognition (ANPR) system to “protect” the district by targeting criminals using arterial routes including the A17, A149 and the A11.

The meeting also heard how there had been a 25% increase in reports of domestic abuse (DA) in the area, including physical, emotional, control and coercion and criminal damage. Supt Harvey stressed how such “closed doors crime” was given high priority by Norfolk Constabulary with a commitment to attend DA incidents within an hour, with DA calls given “top priority” when coming into the police control room.

Both the Chief Constable and PCC reiterated their commitment to protecting neighbourhood policing and a uniformed presence to the best of their ability.

Lorne Green was keen to stress how crucial such Q&A events were to ensure the local community continue to be given a voice, “such events are absolutely essential as public servants”.

Answering a question relating to the disappearance of Police Community Support Officers in the area Chief Constable Simon Bailey said Norfolk currently had around 1,555 police officers “the highest number of police officers in many years.

“Our policing model is very, very effective and is doing exactly what it said it would do, meeting the threat of hidden crimes and the exploitation of the vulnerable to the best of our ability."

Addressing concerns about drug crime in the local area the Chief Constable said the police priority was “suppressing supply, educating young people and protecting the vulnerable” in a bid to address the issue rather than criminalise young people.

Prior to the meeting Lorne spent time with the local EP Youth project in Oak Street, met local residents and business owners in the town centre and visited Millennium Park where concerns had been raised about anti-social behaviour, graffiti and drugs.

Closing the meeting, Lorne, said: “Thank you very much for attending. We have tried to be square with you, I have taken into account many impressions, ideas and concerns and they will not just be discussed, they will be addressed."