Norfolk’s Police and Crime Commissioner (PCC), Giles Orpen-Smellie, has had his first meeting with the county’s Police and Crime Panel, which is made up of councillors and independent members responsible for scrutinising his actions and decisions as PCC. 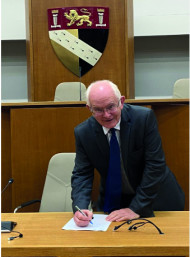 As well as giving the Panel a chance early on in the PCC’s term to ask questions, the meeting offered the PCC and Panel members the opportunity to agree a joint protocol setting out how they will work together.

Attending the meeting at County Hall on Tuesday (13 July), the PCC gave the Panel an overview of key milestones and areas of focus for his three-year term.

He told the Panel that the public consultation on his proposed policing and crime priorities would begin on 26 July. Feedback from Norfolk residents would then be used, alongside information from the Chief Constable and other partner organisations, to inform the development of a Police and Crime Plan to be implemented from 31 March 2022. Asked why he was waiting until 2022 to launch his Plan, the PCC advised members he wanted police and other agencies to be able to plan, and have certainty and stability in the priorities they were working to, for the rest of the year. He also said, with the Government’s Comprehensive Spending Review due later this year, he wanted to be clear on the financial picture and potential impacts for police funding before finalising his Plan.

The PCC was joined at the Panel meeting by Norfolk’s temporary Chief Constable Paul Sanford, who has stepped up from his role as Deputy Chief Constable to lead the force since the retirement of Simon Bailey in June 2021. The PCC told members he will shortly be commencing the recruitment process for a permanent Chief Constable for Norfolk and expected to be able to present his preferred candidate for the role to the Panel by the Autumn.

The meeting also considered succession planning for the PCC’s own role. Members heard that this was being looked at nationally in light of the Covid pandemic to ensure plans were in place should any PCC fall ill or otherwise be unable to carry out their duties. The PCC advised members that, while it was likely Deputy PCCs would be mandated in the future, he was currently working with the Office of the Police and Crime Commissioner for Norfolk (OPCCN) to put in place a local plan which would see the OPCCN’s Chief Executive step into the PCC role in a caretaker capacity should the need arise.

Full details of the meeting, including the agenda and reports can be found on the Norfolk County Council website.