An initiative to prevent illegal fishing has been rolled-out in the west of the county thanks to a welcome cash boost from Norfolk’s Police and Crime Commissioner.

Operation Traverse has been launched today in Norfolk to coincide with the first day of the fishing season.

It aims to prevent fishery and water course crime such as the theft of fish and illegal fishing.

Officers will be working in partnership with the Environment Agency to carry out patrols around local rivers, lakes, ponds and waterways over the coming months. 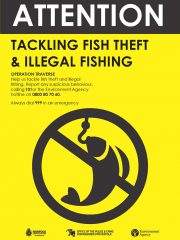 In support of the crackdown PCC Lorne Green has funded the production of 100 corrugated signs to be placed around key areas to educate anglers that their actions could be illegal and to urge people to report any suspicious behaviour.

“I am delighted my office has been able to fund such a scheme in the west of the county,” said Lorne.

“Illegal fishing is just one aspect of rural crime I am keen to tackle as part of my ongoing pledge to address rural crime in Norfolk.

“Rural crime comes in many guises including illegal fishing and fish theft which not only affect livelihoods but can also have a serious impact on the natural environment.”

Operation Traverse is one of a number of initiatives Lorne Green has backed during his first year as PCC to tackle rural crime.

In autumn 2016 the commissioner launched his Rural Policing Strategy and hosted a Rural Crime Summit where, alongside PCCs for Suffolk, Cambridgeshire and Lincolnshire, he signed a Rural Crime Concordat pledging to work across county borders to tackle the crime issues affecting rural communities.

Sergeant Mark Askham of Norfolk Constabulary, said: “Illegal fishing practices not only have a detrimental effect on rural communities and businesses but it can also be harmful to the wild fish population on stretches of our local rivers.

“We hope by patrolling the waterways and installing the posters, we will be able to help educate and encourage local communities to enjoy angling within the law.”