Making a difference through the Covid-19 pandemic

During Covid-19 the Office of the Police and Crime Commissioner for Norfolk (OPCCN) has been working tirelessly to ensure the right help and support remains in place for those in most need in the county.

Within hours of the lockdown in late March the team – many working virtually themselves - contacted partners and commissioned services across Norfolk to assess how they could best help keep services flowing.

From helping victims of domestic abuse or sexual violence, supporting those being targeted by scammers, assisting those at risk of exploitation or those determined to turn around their lives and find a roof over their heads, the team have covered it all. 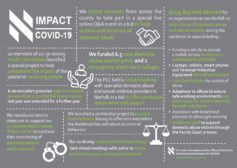 Norfolk’s PCC Lorne Green, said: “I am immensely proud of the work my team have been doing since lockdown to make sure those who need help and support during such an unsettling time have received it.

“They have worked tirelessly to ensure the right funding has been directed where it is needed the most or the right support and expertise given to help keep vital services running.

“They have also continued to give a voice, not only to victims of abuse or exploitation but to the younger generation and to wider members of our community whose voices really count at this difficult time.”

Here’s how the team have been helping those most at need during the pandemic:

And the work has not stopped there. The OPCCN continues to make a difference by providing vital emotional and practical support to thousands of victims of crime in Norfolk.

Some 6.5 new domestic abuse worker posts and dozens of mobile phones and laptop devices have been funded for vulnerable victims and two short-term emergency refuges were also set up for domestic abuse victims.

The OPCCN also sponsored a series of radio adverts in May and June urging victims of domestic abuse to seek help or those who suspected someone was being abused to speak out. The ads linked in with Norfolk County Council’s ‘See Something, Hear Something, Say Something’ campaign and reached more than 44,000 people via partners’ social media platforms.

The team remains in regular contact with all our commissioned services to offer help and guidance on how to best put in place contingency arrangements and adapt services to address demand.