The White Ribbon Campaign was officially launched at the Nest in Norwich yesterday (Monday 11 November) by Leeway Domestic Violence and attended by the PCC, the High Sheriff of Norfolk, Lady Agnew as well as the Lord Mayor and Sheriff of Norwich, Vaughan Thomas and Marian Prinsley.

The aim of the event is to once again encourage businesses and venues across the city to display colourful wooden ‘White Ribbons’ decorated by local artists, members of the community, school children, local arts and crafts groups as well as domestic abuse survivors.

The PCC is particularly keen to lend his support to the campaign as his office commissions a number of services for victims and survivors of domestic abuse in Norfolk.

“My office has invested in a number of projects and organisations, including Leeway, in a bid to support those whose lives have been blighted by domestic abuse in all its guises.

“We must do all we can to continue to give a voice to the women and men in our county who have been or continue to be affected by this crime.

“Every survivor of domestic abuse in Norfolk should be able to get the support they need-first to be safe, then to recover.

”Together we can work to make a real difference.”

Projects which have been commissioned by the PCC’s office in a bid to help those affected by domestic abuse include: 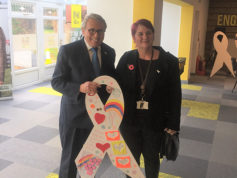 White Ribbon is an international symbol of the movement aiming “to end male violence against women, once and for all.”

The ribbon has been a symbol of unity for all the people who commit to prevent and fully eliminate all the forms of violence against women including, domestic abuse.

Where to get help:

If you, or anyone else, is at immediate risk of harm, phone the police on 999