The ‘White Ribbon Window’ 2018 campaign was officially launched at the Forum in Norwich yesterday by Leeway Domestic Violence and Abuse Services and Norwich City Council.

The aim of this year’s event is to encourage businesses and venues across the city to sponsor and display colourful wooden ‘White Ribbons’, created by the local community, in their windows to show solidarity for those affected by domestic abuse. 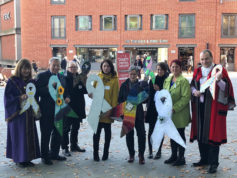 The PCC is particularly keen to lend his support to the campaign as his office commissions a number of services for victims and survivors of domestic abuse in Norfolk.

“It was a pleasure to attend the launch of such an important initiative in our county,” said Lorne.

“My office has invested in a number of projects aimed at supporting those whose lives have been blighted by domestic abuse in all its guises.

“It is crucial we continue to have strong partnerships in this county to tackle domestic abuse while ensuring those who are victims get the best possible support.”

Projects which have been commissioned by the PCC’s office in a bid to help those affected by domestic abuse include: The PCC’s support for the campaign follows the launch of the innovative Norwich Connect Service - a partnership between national domestic abuse charity SafeLives, and local statutory partners, including the OPCCN to test new approaches to addressing the gaps in the national response to domestic abuse.

The White Ribbons will be on display in the city from today until 25 November 2018 which is National White Ribbon Day.

The White Ribbon is an international symbol of unity for all the people who commit to prevent and fully eliminate all forms of domestic abuse.  For more information visit www.whiteribbon.org.uk.