Two colleagues at the Office of the Police and Crime Commissioner for Norfolk have become Domestic Abuse Champions in a bid to highlight the issue and provide vital support where needed.

Liam Bannon and Amanda Murr took part in the DA Change Champion training in May and will join a team of around 1400 such experts across the county. 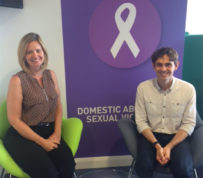 Champions are trained to develop knowledge on asking, responding, and supporting people affected by domestic abuse, and to use their knowledge to help their colleagues to respond effectively and appropriately.

Liam, who is Policy, Research and Equalities Officer for the OPCCN, said: “Domestic abuse is a huge area we have been focusing on in our office through the commissioning of key services but we didn’t have the important skills of a DA Champion in our office.

“We have a very strategic oversight so it has been really good for me to understand the reality of DA, hearing real stories while also helping to share best practice.

“We often talk about how many people are affected by DA but I didn’t know what that actually meant in reality - I do now.

“Men don’t really talk about relationships and they don’t necessarily feel comfortable talking to a woman about what they are going through so I thought it would be a good idea to take on the role.”

Liam has been the Policy and Research Officer for the OPCCN since December 2015, prior to which he worked as a research intern for a year.

Liam provides both policy insight and research support to the OPCCN’s commissioning team and helps them to engage with key providers of support to domestic abuse victims by managing and co-chairing the Domestic Abuse Partner Forum.

Amanda Murr is the Senior Policy Officer for Victims and Vulnerability for the OPCCN.

Speaking about her new role as a DA Champion, Amanda added: “DA Champion training is about empowering us to empower others.

“Sometimes as a DA Champion safeguarding will be challenging because some victims don’t realise what concerns you have about them.

“But a workplace can be seen as a safe place for someone suffering domestic abuse and together we can make sure people are and feel safe.

“It is about making sure people know there is help and support out there and they do not need to suffer in silence.”

Amanda has significant experience in working in the strategic areas of safeguarding and vulnerability promoting the multi-agency partnership response with statutory, voluntary and private sector partners.

A Domestic Abuse Change Champion: The champion network contributes to enhanced knowledge in frontline organisations, therefore reducing risk of serious harm in the belief they can decrease the human and organisational cost if risk is identified and managed early.

Champions are trained to develop knowledge on asking, responding, and supporting people affected by domestic abuse, and to use their knowledge to help their colleagues to respond effectively and appropriately.

Champions must be given time by their employing organisation to commit to the role and be supported by their managers and colleagues in order to carry out their role effectively.