An initiative launched more than three years ago thanks to funding from the Office of the Police and Crime Commissioner has received positive praise for helping turn prisoners’ lives around.

Community Chaplaincy Norfolk (CCN) was introduced in the county in February 2017 to help those keen to make a fresh start by changing their attitudes and behaviour which previously led to criminality.

The first of its kind in Norfolk, CCN initially received more than £20,000 from the OPCCN allowing it to run for two years before receiving a further £31,800 in February 2019 to expand the scheme for another year.

Norfolk’s Police and Crime Commissioner, Lorne Green, said: “The scheme is about giving some of the most vulnerable people in our communities a second chance in life and I am heartened that it is making such a difference to so many lives – clients and mentors alike.

“I am extremely proud my office has been able to play such a vital part in helping ensure CCN has the right foundations in place to ensure its success now and into the future.”

Community Chaplaincies work alongside prisoners, ex-prisoners and their families. They are multi-faith and work with offenders of all faiths and none.

The main aim of the scheme is to offer offenders the support and motivation they need to stop them re-offending once released from prison, and to lead a more fulfilling lifestyle within their local communities.

Since its introduction the initiative has seen some 19 volunteer members trained to work with around 72 offenders in prisons including Norwich and Wayland to offer support and guidance for life beyond the prison gates.

The success of the scheme can be found in the words of some of its clients and mentors:

“The most helpful thing about working with my mentor is them supporting me through all of my issues, and I feel safe, because I am with a non-user, someone normal”

“On my release from prison… I was met at the gate by CCN.  It was a cold morning and all I had on was a pair of trackies and a jumper and I was thinking to myself I was better off inside, but by the end of the day, I had a full set of clothes and somewhere to live…

“I am now drug free and fighting my battle with addiction in a nicer environment and it’s all with the help from the Community Chaplaincy.  If it wasn’t for them, I truly believe I would be back inside or have a raging drug habit…”

“My goal for my clients is safe housing, a job with a good purpose that provides self-worth for the individual and integration into the community.

“When I reflect over the past 18 months, I wonder whether I've made a difference. Have I added value to the lives of these chaps? The answer is - I really don't know. What I do know is that I've walked alongside these gentlemen for a season of their lives and been available to help them along the way.”

Mel Wheeler, who took up the post of Project Leader in October 2019, said: “CCN is very grateful to Lorne Green for investing in the work of CCN.

“The dedication of our mentors, giving their time to support ex-prisoners is to be commended, and it is a privilege for me, to share the transformational journey undertaken by some of our clients who are determined to prove that change is possible." 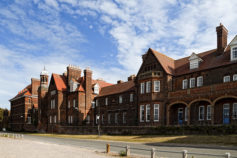 Praising the scheme Father Paulinus Heggs, Lead Chaplain at HMP Norwich, added: “I make a point of speaking to prisoners who have a Community Chaplaincy mentor relationship, and it is not uncommon to hear voices of hope from many of them – some of them who have been known to me for some time, and for whom the concept of "hope" has been a forgotten fantasy.

“The knowledge that someone is prepared to help them to start afresh on release can have a profound impact on the viewpoints and lifegoals of some prisoners.  Not all, certainly, but enough to make a difference.

“I have also heard anecdotal evidence, through church groups, that ex-prisoners who are still working with CCN mentors several months after release continue to have a positive outlook and have not returned to former criminal and antisocial habits. “

CCN was registered as a charity in November 2018.

Conrad (not his real name) was first in touch with CCN in 2018, as he approached another release from prison, with fear and uncertainty.  He had a long history of involvement with the Criminal Justice Service, with persistent anti-social behaviour offences throughout his teenage and adult life.

CCN mentors maintained contact with Conrad throughout a troubled period which included heavy drinking and repeat offences.  The outside world was a frightening and confusing place for Conrad who had not received good parenting or guidance and was disturbed by traumatic memories of childhood abuse which significantly impacted his mental health.

On more than one occasion Conrad deliberately re-offended with the goal of returning to prison, as he was homeless and frightened in the wider community.

A CCN mentor was able to connect consistently with Conrad, whether he was in custody or out of prison, beginning the slow process of building enough trust to be able to challenge Conrad’s anti-social behaviour and support him to stay sober long enough to access help for his underlying anxiety and depression.

Conrad still finds being in the community challenging, but he is living in supported hostel accommodation, meeting regularly with his mentor, who has supported him to engage with mental health services, and he is five months sober.  He has not committed any further offences since being released from prison at the end of October 2019.