An initiative which helps to re-home dogs while improving the well-being and mental health of prisoners has been hailed a success in the county thanks to funding from Norfolk’s Police and Crime Commissioner.

The Rescue-Rehab project was launched at HMP Norwich as an initial 12-week pilot in December 2016 but based on its success, PCC Lorne Green pledged extra funding until the end of April 2020.

The scheme sees homeless dogs from local re-homing facility Meadowgreen Dog Rescue Centre, paired with suitable prisoners, who with assistance from a qualified trainer, work alongside the dogs to help boost their social skills.

The project is not, however a one-way process, as many of the 89 prisoners who have been involved in training the dogs and receive certificates in areas of dog handing, training and socialisation, have seen an increase in their confidence, well-being, mental health and self-motivation.

Rescue-Rehab leader Michele Neave, who has just published its Annual Report, said: “Personally I believe that compassion and responsibility are bedrocks for a kinder society.

“The identification with these animals has had an impact that little else could achieve and all the team strongly believe that what we offer could help in some small way with rehabilitation, so important before release.

“It is the team that has been the real key to the success of this project - professional, flexible, committed and most of all supportive of each other in every way.

“An over-riding belief in the power of the human-animal bond to facilitate change has proven a fascinating journey ‘within the walls’.

“Everyone from the prison officers to the dog handlers, administrative staff to the chaplaincy all embrace the four-legged visitor who provides a welcome reason to stop and smile.”

Norfolk PCC Lorne Green said: "This scheme is a win, win win - a win for the prisoners, a win for the dogs and a win for the community. It is creating hope for all and with hope comes healing and a re-set onto a positive path in life.

"The dogs, which come from rescue homes, have been turned from nervous dogs that are now so well-mannered and behaved that homes have now been found for them.

"That's down to the attention that prisoners have given to them under the guidance of a professional dog trainer that we've made available.

"I think we have broken new ground in helping to turn prisoners' lives around. If we can turn around just one life it's worth it. Everyone benefits.”

To date 25 dogs have taken part in the scheme – all of which have been re-homed, including Blue, Butch, Mack and Reggie. 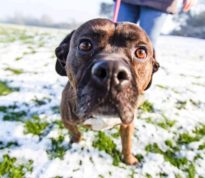 The impact on the prisoners who have signed up to the initiative has been highlighted in the Annual Report.

The Office of the Police and Crime Commissioner funded the scheme for two initial 12 week pilots before increasing funding from 1 May 2018 to the end of April 2020 - £60,282 was awarded in total.

Governor Martin Edwards, from HMP Norwich, said: "HMP Norwich embarked on The Rescue-Rehab scheme via our chaplaincy department and the Police and Crime Commissioner and over time it has evolved to become part of our education curriculum.

"Within the custodial environment the benefits are many, both to participants and dogs. We are pleased to be part of a process that improves the dogs well-being and chances of being re-homed.

"We should never underestimate the impact, benefit and feeling of well-being for prisoners who have taken a role in this process, raising self-esteem, confidence, self-worth and giving a sense of purpose that at times can be lost whilst in custody."

Positive comments from prisoners who have taken part include:

“I have learnt to manage my anger”

“I have felt more calm and positive.”

An extract of a letter from one of the prisoners:

“What a wonderful project and privilege it is being given this opportunity to work with these dogs and people and to be given a chance to help these animals rehabilitate into hopefully a loving home…..

“The highlight of my week is Friday afternoons where for a couple of hours I feel anxiety free and forget about all the negatives….I can’t stress enough how much it helps me with my personal demons.”

How Reggie found his "forever home": 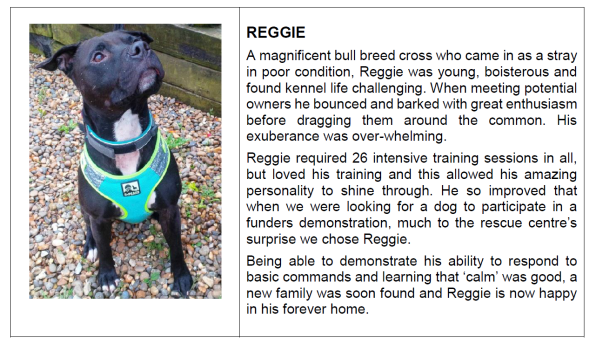