The ‘Step In, Speak Up’ sessions have been delivered to more than 8,000 male and female students aged 14 to 18 at 29 high schools and colleges in Norfolk by national theatre company Performance in Education (PiE).

The project in Norfolk has been funded by the Office of the Police and Crime Commissioner for Norfolk (OPCCN) as part of its successful bid to the Home Office's Safer Streets Fund late last year - made available specifically for projects to tackle violence against women and girls (VAWG). 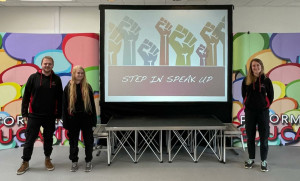 The £31,500 grant has enabled PiE to deliver engaging and interactive sessions to 8,090 students since mid-February, focusing on encouraging bystander intervention and creating behavioural change towards attitudes around unhealthy relationships, domestic abuse and sexual violence against women and girls.

The aim of the sessions is to educate pupils about sexual violence and give them knowledge, confidence, and skills in becoming active bystanders, intervening safely in situations that cause them concern, using the 5 Ds:

Over the past six weeks 63 shows have been performed and 30 workshops have taken place at schools and colleges including Sprowston Community Academy, Hellesdon High School, East Coast College and Wymondham College.

Commenting after the session at Hellesdon High, Assistant Principal, Ina Coubrough, said: “The Bystander Intervention training was an engaging and sensitive way to explore the topic of sexual violence towards women and girls.

“It was eye-opening for students to see how seemingly innocuous behaviour can escalate into a situation that has long lasting ramifications. The practical techniques covered in the workshop can be applied in a range of situations, including challenging homophobic, transphobic and racist bullying.

“Students really enjoyed the drama element of the performance; the cast were thought provoking and delivered the material with confidence. Several students have asked to join a working party as a result of the sessions.”

Feedback from students has included:

Norfolk’s Police and Crime Commissioner, Giles Orpen-Smellie, who attended the Hellesdon session and has made VAWG one of his priorities in his new Police, Crime and Community Safety Plan, added: “What struck me the most was the silence among the pupils during Performance in Education’s presentation.

“The team clearly captured and held the attention of their audience and I hope their message will have been heard and remembered by all the students who have taken part in Norfolk.

“This is one of a number of projects and initiatives my office is involved in to tackle violence against women and girls in Norfolk.

“As a county and a country, we have a long way to go to ensure women and girls can go about their lives safely and without fear.

“It is about societal change, and such bystander programmes are key to helping instil that change at an early age.”

Ellie Hurrell, from PiE, added: “We are delighted to have been given the opportunity to work with the students in Norfolk on our active bystander training project. Through our interactive show and workshop, we’ve addressed and confronted the negative attitudes, behaviours, and misconceptions around sexual violence against women and girls.

“We’ve also helped equip students with a practical set of skills to allow them to intervene safely and appropriately when faced with problematic situations amongst their friends and peers.”

The campaign is one of a number of projects being funded by the OPCCN through the Safer Streets Fund, including an expansion of the CCTV network in King’s Lynn, improved street lighting in Great Yarmouth and work with the University of East Anglia to develop students’ skills in addressing issues and knowing how to recognise and respond to problematic attitudes and behaviours.