We know that just because we are going into the summer months it does not mean everything is sunshine behind closed doors – partner organisations across Norfolk are launching a campaign to let victims of domestic abuse know there is help and support available.

Partners including the police, the Office of the Police and Crime Commissioner for Norfolk (OPCCN), health, councils, and charity organisations are encouraging people to come forward for help and support should they feel they need it, including perpetrators and hard to reach groups.

Detective Superintendent Andy Coller, who co-chairs the DASVG (Domestic Abuse and Sexual Violence Group) with Gavin Thompson, Director of Policy, Commissioning and Communications at the OPCCN, said: “We know domestic abuse happens throughout the year across all sections of the community, but we are aware we can see an increase during the summer months.

"It’s not completely clear why this happens but may be connected to the population expanding as tourists holiday in the county, more social gatherings and alcohol being consumed and more pressures on families during the school holidays. Though it’s important to recognise that domestic abuse does not stop when summer ends.

“We want to highlight the impact over the holiday period, through a social media campaign looking at several different aspects including signposting help to people from perpetrators to victims and those from hard to reach groups.” 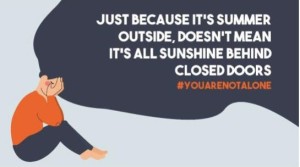 Organisations will be sharing social media posts as part of the campaign highlighting organisations that can help and support – this will include the LGBTQI+ community, children, perpetrators, and those from more diverse communities.

The number of domestic abuse crimes reported to Norfolk Police has increased during the summer periods between 2019 and 2021 by just over a fifth, 23%, from 2,991 to 3673 reports.

Earlier this year the OPCCN announced the launch of a county-wide domestic abuse service to offer free, confidential, and non-judgemental support to those affected, and their children, to help them recover and build a new life free from abuse.

The Norfolk Integrated Domestic Abuse Service (NIDAS) is funded by the OPCCN, Norfolk County Council, Norwich City Council, South Norfolk and Broadland District Councils, with £6.6million being invested over the next five years.

It is the first system of its kind in the county, offering a fully integrated service making intensive one-to-one support, a multi-agency response and help towards practical solutions available.

If you are a victim of domestic abuse or witness abuse, there are a number of organisations that can help you. In an emergency contact the police on 999. In a non-emergency the police can be contacted on 101 or see a list of support services >>here