Victims of sexual abuse are continuing to be given vital help by a Breckland-based charity thanks to support from the Office of the Police and Crime Commissioner for Norfolk (OPCCN).

The Rowan Project received a cash-boost from the OPCCN in November 2020 to offer specialist support for victims of sexual abuse, sexual violence, rape, and recent and historic child sexual abuse.

The service officially launched in February 2021 – during the Covid-19 pandemic – as a two-year pilot scheme.

Norfolk’s Police and Crime Commissioner (PCC) Giles Orpen Smellie visited the charity in June to find out more about the project and how it has helped meet demand created by the pandemic. 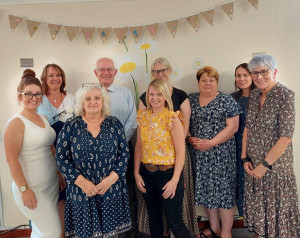 PCC Giles Orpen-Smellie with colleagues from The Rowan Project

PCC Giles Orpen-Smellie, said: “It was a real pleasure to meet with the team and hear how the funding from my office has helped make a difference.

“More importantly I was keen to know more about how the project will continue to help those affected by such horrific abuse to move forward on their personal journeys and support them in their recovery.

“Sadly, it is clear there is a vital demand for such services in our county and when someone has found the courage to seek help it is only right the correct support is there for them.”

The PCC has made tackling Violence Against Woman and Girls (VAWG) one of his priorities in his Police, Crime and Community Safety Plan for Norfolk.

The Rowan Project was set up by the Daisy Programme which has provided support and counselling to people affected by domestic abuse for seven years.

Thanks to the initial funding of £141,066 from the OPCCN, Daisy began offering specialist support for victims of sexual abuse, sexual violence, rape, and recent and historic child sexual abuse – a project now known as the Rowan Project.

Kate Biles, Project Manager for the Daisy Programme and the Rowan Project, said: “This funding has enabled us to provide a service that is truly life-changing for survivors of sexual abuse.

“Many of the people accessing the Rowan Project have lived with the trauma of sexual abuse for most of their lives without ever receiving any support previously.

“We are proud that we have been able to achieve so much in such a short time and to be there for those that need us. We hope that we can continue to provide that support in future years.”

Between February 2021 and February 2022, the Rowan Project received 103 referrals to its service – 53% of those were self-referrals and 47% referrals from professionals. During this time some 49 clients completed counselling with the number of sessions required varying according to individual needs.

Since February 2022 the service has received a further 31 referrals and helped a further 21 clients.

Feedback from clients has been really positive with comments, including:

“I was very traumatised and emotional when I began my sessions. Now feel much calmer and more able to accept the trauma as part of my past that cannot harm me anymore.”

“There was no situation I felt not listened to, or not being understood.”

“I want to thank you for contacting me and giving me the chance of working through my experiences….I am extremely grateful, my life and my perception of myself improved dramatically. Thank you.”

“You have all given me the power and strength to move through my experience.”

To help service users cope with and recover from the harm and psychological distress they have experienced, support is available over the telephone, online or through face-to-face sessions.

The support services provided by The Rowan Project and the Daisy Programme can be accessed via:

Support is also available through the Sue Lambert Trust and Norfolk and Suffolk Victim Care.

The OPCCN has funded a number of projects and organisations as part of its successful bid to the Home Office's Safer Streets Fund late last year - made available specifically for projects to tackle violence against women and girls (VAWG).

An expansion of the CCTV network in King’s Lynn, improved street lighting in Great Yarmouth and work with the University of East Anglia to develop students’ skills in addressing issues and knowing how to recognise and respond to problematic attitudes and behaviours also received Safer Streets funding.

In addition to the VAWG funding the OPCCN also announced additional grants for two other Norfolk charities to help victims and survivors of sexual abuse.

In February the charity Fresh Start New Beginnings - set up to provide a therapeutic service for children and young people who have reported being sexually abused and to offer support for their families - was awarded more than £50,000 to help fund child support workers and specialist services for the next year.

During the same month more than £100,000 was awarded to Norfolk’s Sexual Assault Referral Centre (SARC) to continue to fund a team of Independent Sexual Violence Advocates (ISVAs). ISVAs support victims of rape, attempted rape or serious sexual assault, whether it happened recently or in the past and whether the person supports a police investigation or not.

For more information on the PCC’s priorities for Norfolk, including VAWG, read the Police, Crime and Community Safety Plan 2022-24 >>