Spending 15 years behind bars isn’t usually cause for celebration but, this week, a Norfolk volunteer who has done just that has been recognised by the county’s Police and Crime Commissioner (PCC).

Unless you have spent time in police custody or work in the Police Investigation Centres where those detained are held, you probably won’t have heard of the Independent Custody Visitors (ICVs) – volunteers who visit the county’s custody facilities, unannounced and in pairs, to check on the treatment and welfare of people held there.

Eric Langford, from Snettisham, is one of Norfolk’s longest serving ICVs, having joined the scheme in 2004. Now, 15 years later, Eric has taken the decision to retire from the role. 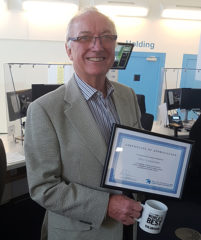 To mark Eric’s retirement, which falls during National Volunteers Week, PCC Lorne Green met with him at the Police Investigation Centre in King’s Lynn to recognise his long service and offer his personal thanks.

PCC Lorne Green said: “National Volunteers Week - and, more importantly, occasions like this which recognise dedication and commitment to volunteering by people like Eric – serve as a reminder that this country couldn’t run without volunteers. Norfolk, in particular, has some excellent ones.

“Our custody visitors are the eyes and the ears of the public – visiting detainees, reporting on what they see and offering public reassurance that the police are treating people with fairness and respect. The efforts of all the volunteers who take on this role are not only very much appreciated, but have also helped win the scheme a national accolade from the Independent Custody Visiting Association.” 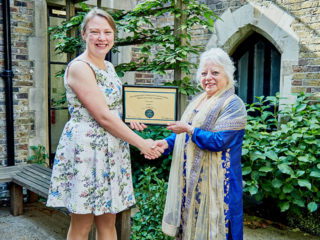 Asked about his time as a custody visitor, Eric said: “It’s a role that very few are aware of but which is so important in ensuring that people detained by the police – many of whom are vulnerable - are being treated fairly and in accordance with their rights. Every week of every year, volunteers take it in turns to visit custody, unannounced and in pairs, during the day or even into the night, to talk with those in custody. For the time detainees are held in custody, they lose their freedom and the privileges that come with it, but they deserve an appropriate level of care and welfare – and we help ensure they get that. My experience has been that the police working in Norfolk’s custody facilities welcome our scrutiny and our observations, not least for the role they play in helping officers and staff continue to learn and improve what they do.

“I’ve very much enjoyed my time as an ICV; it has given me the unique opportunity to learn about the inner workings of custody and policing, and the laws which form the framework for what they do. I’ve also enjoyed working alongside the other volunteers taking on the role. All ICVs are highly trained and professional, and many of us have done the role for a number of years, meaning new ICVs have a whole raft of knowledge and experience to draw upon. I’d definitely encourage those looking for a volunteering role with a difference to consider joining one of the custody visiting panels.” 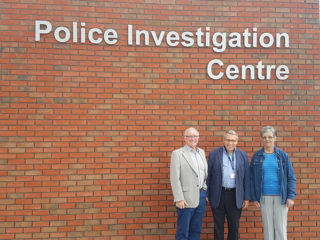 PCC Lorne Green launched a recruitment campaign at the start of the year for custody visitors. More volunteers are currently needed to visit police custody facilities in Great Yarmouth, King’s Lynn and Wymondham.

“We had an excellent response and have welcomed a number of new recruits to our custody visiting panels – but we could still do with a few more. It’s a truly unique and interesting volunteering role - the fact that Eric has spent so many years as a custody visitor is testament to that. I hope his story will inspire anyone who can offer a few hours a month to give something back to society to get in touch.”